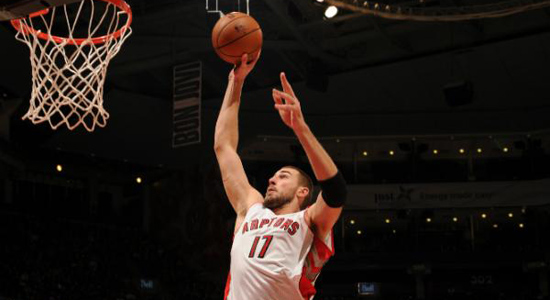 The inaction had been paralyzing and the Raptors were stuck in limbo.

To trade Rudy Gay meant a steep drop-off in star power, scoring, and individual offensive shot-creation. To keep him meant to commit to giving Gay 19 shots per night at an inefficient .338% and stifling the team’s ball movement.

Before a game that had been hyped for months as the return of Laker legend Kobe Bryant from a torn Achilles tendon, news broke that Raptors GM Masai Ujiri had secured a deal to send Gay to Sacramento in a seven-player shuffle.

Despite playing short-handed, the Raptors played with energy and emotion amid the uncertainty and topped the Lakers in front of a confused Staples Centre crowd. Details slowly began to emerge throughout the action.

When describing the trade to those who don’t know, haven’t heard or are not huge basketball fans I have been very careful not to say “The Raptors traded away their best player.” Instead I usually say “their highest-paid player.”

What Gay brought to the team was tremendous talent that wasn’t always put to best use. It didn’t seem to work. After he arrived in Toronto in a mid-season deal from Memphis last year the Raptors closed the campaign with a .500 record with Gay in the lineup. This year the Raptors had stumbled to a mediocre 6-12 start and despite briefly leading the poorest division in the NBA, the team was a middling mess, often out-performed by over-achieving teams like Phoenix on Friday and even worse (1-10) against teams with winning records this season.

In order to play the defence head coach Dwane Casey promotes, the Raptors became one of the slowest teams in the league, averaging the fewest average posessions in the league at one point and the fewest assists. Without fast-break opportunities this forced them to play half-court sets with little offensive ingenuity nor ball movement as Gay and DeMar DeRozan often shot contested long-range two-pointers with the clock winding down.

Both averaged career-highs in points and career lows in shooting percentage in this strange strategy.

Now without Gay, the Raptors are set to improve on-court chemistry and passing. Will they be better off without Rudy Gay?

An NPH poll launched after the trade shows at the time of posting this story 59% of responders believe that the team is indeed better off without the high-flying, high-priced wing.

In his place, the Raptors picked up a vastly underrated point guard in Vasquez who, at 6-6, has excellent size for his position and is coming off a sparkling season where he tallied more assists than any player in the NBA.

I spoke to a friend in the Raptors organization who confirmed Vasquez was sought ahead of current Kings’ starting point guard Isaiah Thomas for his ability to distribute the ball, and with the hopes that he could help fuel the development of Jonas Valanciunas (something Rudy was never going to do).

Salmons played some brilliant and memorable basketball with the Bulls in 2009, but has journeyed with sub-par teams most of his career. He’ll bring scoring, shooting, and depth on the wing. Hayes is a veteran banger and brings leadership, toughness, rebounding, and shores up Toronto’s thin front-court rotation.

Patrick Patterson is an intriguing piece with room to grow. A member of John Calipari’s first Kentucky team along with John Wall, DeMarcus Cousins, and Eric Bledsoe, Patterson hasn’t shown the same potential of his former Wildcat teammates, but could still have another level to reach. He and the rest of the new Raptors should be in the lineup Friday against Philadelphia giving the Raptors some depth after their thin bench was exposed against a deep Spurs team Tuesday.

Now that Ujiri has taken action, the Raptors direction is clear. With Bargnani and Gay off the books, the Raptors have the salary cap room and roster flexibility to make the moves that Ujiri deems appropriate.

He’s torn down the higher-priced, less efficient reminders of Bryan Colangelo and now can start the task of a true rebuild. Whether that means more moves are to come or the Raptors maneuver their way into the most talented draft of the past 20 years remains to be seen, but Ujiri has been quick to strike so far in his short tenure in Toronto.

Key Stat – Raptors shot 4-26 from 3, but Amir Johnson dominated inside

Archbishop O’Leary: The Team to Beat in ...