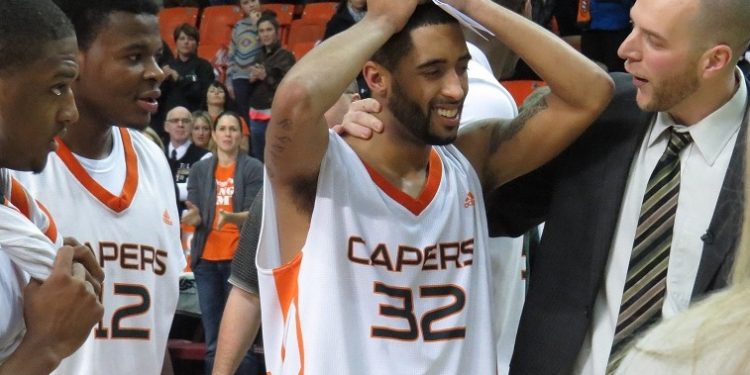 Halifax, NS—If you made it back for the final day of the AUS Championships, you were in for a treat. The most anticipated matchup in the AUS was for all the marbles. What a better way than to have two of the top teams in the conference and the country battle it out for AUS supremacy.

The championship game turned out to be everything it was expected; two top teams playing tough and battling it out until the finish. The Cape Breton Capers emerged victorious defeating the Acadia Axemen 83-75.

“From day one we fought as a family and we never quit on each other…we made sure that nobody got down on their selves, and to win as a family its an unbelievable feeling,” said back to back MVP Jimmy Dorsey following the win.

Right from the start you could feel the physical intensity that both teams were determined to bring to the game. A hard fought first quarter ensued as both teams tried to set the tone early. NPH #4 ranked Owen Klassen went to work early and racked up four points in the opening quarter displaying his versatility, including some great footwork in the post.

Stingy Acadia defence coupled with poor shooting from Cape Breton, [3/17] allowed the Capers to muster only nine points. Acadia didn’t fare much better in the start shooting 5/18, taking a 13-9 lead into the second quarter.

The second quarter allowed both teams to shake off the bad shooting and begin to fill the bucket. Neither team was able to pull away as they both put 22 on the scoreboard.

Acadia continued to feed the ball into Klassen who accepted the challenged, and kept scoring. On the other end, Meshack Lufile added seven points all in the second quarter to keep the battle close. Jimmy Dorsey was not getting his shots to fall from the floor, 1/5 in the first half, but went 6/6 from the free throw line to have nine points at the break.

“I don’t care if it’s Carleton, Ottawa, we’re coming in and we’re putting it on everybody.” – James Dorsey

Following the halftime break, Acadia’s Bradley States opened the quarter with a three pointer to open the lead to seven. However the Capers would storm right back, lead by Sean McCormick to take a 41-38 lead.

The Axemen would not give in that easy and Klassen responded like he had all game with another hard fought quarter scoring 10 points. Dorsey would continue to show why he was the MVP this year adding 10 points of his own as both teams again matched each other’s total in the quarter.

Heading into the final frame no one was leaving their seats at the Metro Centre, the Axemen led by four. Anthony Ashe and Owen Klassen quickly put Acadia out to a five point lead midway through the final quarter.

However, like they have all season Cape Breton found a way to bring it back and continued to chip away at the lead. Kayon Mayers  picked it up and added eight points in the quarter including drawing a number of fouls from Acadia sending him to the line multiple times.

Dorsey would finish off his last AUS quarter in style with eleven points including a back breaking three to give CBU a 75-70 lead with little time remaining. Acadia had hit desperation mode as the lead had grown to seven and with a Sears three they had life again. Acadia had drifted away from Klassen down the stretch and had started to rely on the three that wasn’t falling.

Cape Breton Head Coach Matt Skinn said, “We had to adjust our lineup a little bit because of how good a player Owen is and we ended up switching Sean (McCormick) onto him and went a little bit smaller down the stretch. I really felt that helped us get to a few more loose balls defensively and get on the boards a little bit more”

Dorsey finished 16/16 at the line and had a total of 30 points to cap off a historic AUS career.

“He hit every free throw tonight, everything we’ve asked him to do this year he’s done, made all the plays for us down the stretch, he’s a special player,” said Skinn.

With the win, the Cape Breton Capers captured an automatic berth and will be seeded second for the CIS Final 8. While they were unable to lock up the automatic berth, the Axemen secured the wildcard (#5) and will be joining the Capers in Ottawa next week looking for revenge on their third trip to Nationals in as many years.

Dorsey explained his fairy tale ending in the conference he calls home.

“It means everything to go out and win the AUS, to get the MVP, and now to take it to the CIS and prove to the country what were made of means the world to me”

NPH Poll: Which School Has The Wildest ...