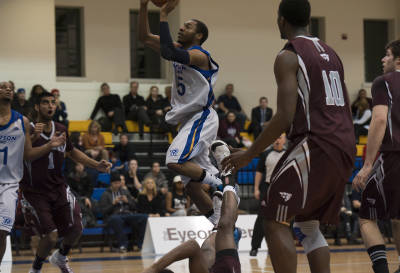 TORONTO, ON–The magical season continues for the Ryerson Rams. The lone remaining undefeated team in the OUA and No. 7-ranked team in the country defeated the visiting Ottawa Gee-Gees by the score of 76-71. Head coach Roy Rana loved it, but preaches caution. “The rankings are nice, but at the same time they’re meaningless,” he said. “Our goals are bigger than a ranking.”

And yet, the Rams are likely to keep soaring in the CIS rankings as they keep winning. “Every win is a big win for us,” Rana said, “and tonight was another one.”

That’s because Ottawa itself is no slouch as it was ranked No. 10 in the CIS before the game. “Both teams were evenly matched,” Ottawa head coach James Derouin told NPH. “We’re happy with where we are. We have some young players who really must develop in time for the playoffs.

The Gee-Gees are a young team with seven rookies on the roster, but that hasn’t stopped the team from gelling. “They’re a very, very good team,” Rana said.

Their style is based on good outside shooting. This was obvious in the first quarter, when fifth-year Warren Ward and third-year Johnny Berhanemeskel hit the target while the team played under control. The Rams were the ones playing too careless and it cost them, with Ottawa leading 18-12 after the first 10 minutes of the game.

Ryerson goes as its backcourt of Jahmal Jones and Aaron Best goes. The style of the team is based on athleticism. “They’re quickly proving why they’re one of the best backcourts in the country,” Rana told NPH. “They’re phenomenal off the bounce and they’re starting to play at another level of confidence. Mentally they’re in it.”

Just before halftime, Johnny Berhanemeskel hit a three-point shot to beat the buzzer and give his team a 38-35 lead. By then, Ottawa had made its three-point shots (i.e. 6 of 13) but missed its free throws (i.e. 4 of 10). The reverse trend was true for Ryerson–1 for 10 in three-pointers and 10 for 12 in free throws.

The shots stopped falling in the third quarter for Ottawa however while Ryerson started making his own and getting baskets in transition. Best led the way, scoring 12 points total in the period. The team pushed its lead to as many as 11 points. Despite closing the period on a strong note, it was a lead the Gee-Gees couldn’t overcome.

In the fourth quarter, a three-point shot from Berhanemeskel cut the Ryerson lead to 66-63 but the host team responded with a 7-2 run to effectively end it. A Vikas Gill three-pointer at the final buzzer provided the final margin.

The difference for the Rams, this year, is an improved defense. The Rams forced 21 turnovers total and had many fast-break opportunities, where Best and Jones are lethal. The two guards either finished at the rim or were fouled, or both.

Ryerson was the aggressor all night, said Derouin, and that’s probably why the Rams attempted 35 free throws to the Gee-Gees’ 15. “They were the most aggressive team, and it shook us up a little bit,” Derouin said. “Calls go to the more aggressive team. That’s generally how basketball works.”

Meanwhile, Best and Jones showed why they are possibly the best backcourt in the entire CIS as they scored 53 points on 35 shots. No other player on the team scored more than 8 points (i.e. Jordon Gauthier), because the team didn’t need it.

Next, Ottawa plays against the Toronto Varsity Blues. Derouin said that, “We still feel like we have a higher ceiling.”

For the Rams, a home game against the two-time defending champions Carleton Ravens await–up for grabs will be the first place of the OUA East division, if not more even. “We’re going to play on another level,” Rana said. “We’re going to have to shoot the ball better to have a chance. It’s Carleton–number one in the country for a reason, right?”

Yes, that sounds about right–it’s the same reason why the Rams are ranked No. 7.