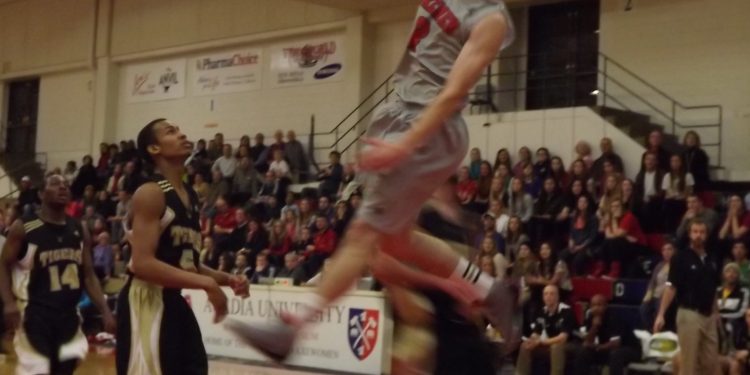 Brad States throws down the HAMMER!

Wolfville, NS–When a team’s season is churning along, and you have a #2 CIS National ranking and loads of talent ,it is sometimes hard to find that character builder/adversity that brings a team together to make them a true championship contender.

Well the Axemen got that Christmas wish; All-Conference player Owen Klassen went down with an ankle injury during the Rod Shoveller Tournament and the UPEI Panthers came into Acadia outworking, outperforming the Axemen handing them their first loss of league play.

How did they respond?

“We went to work all week and watched game tape of Dal everyday in how they broke us down defensively and took us out of our O…we were prepared” said Anthony Ashe, after the Axemen completely dismantled the Tigers en route to a 79-57 victory.

The Tigers came out of the gate strong and took an early 7-4 lead as they attacked the basket strong, keeping the Axemen on the perimeter for jump shots.

Lauchlan Gale came out with energy and attacked the offensive glass for tip ins early then his teammates matched him and locked down defensively.

With the Tigers up 9-7 and looking like they were taking control of the game Brad States picked up the deflection and raced down the floor for a poster jam, followed by another highlight dunk mere seconds later! This infused the crowd and the team; Axemen embraced the energy and locked it down defensively.

Sean Stoqua came off the bench with five minutes left and quickly contributed to the offense as he broke down the Dal D off the bounce and chipped in a quick six points and two assists to help give Acadia the 23-14 first quarter edge.

In a preseason break down ,NPH talked about the depth and talent of the Axemen and on this night these very talented young men stepped up and met the challenge and played off each other to make each other better. The most evident part of this talent came out on the defensive end of the floor.  In the second quarter, the Axemen held Dalhousie to five points for a 20-5 quarter and an overall 24 point lead at 43-19.

The Axmen moved the ball and created easy looks for each other as Tyler Scott, Jonathan Tull, Anthony Ashe, Brad States  all contributed to the run. States and Ashe each echoed after the game “one through 12 we have guys that can come in and play and contribute, we play together to get the common goal and thats to win.”

This trust was evident as the Axemen repeatedly made the extra pass to get open easy looks that allowed runs of 11 and 7.

The third quarter picked up right where the second quarter left off with the Axemen playing complete team ball defensively and fueling the offensive end.  They quickly pounded away at the wounded and docile Tigers and opened up a 66-29 lead after three quarters which again started on Lauchlan Gale’s offensive tip in.

With the game all but over the Axemen cruised through the fourth quarter with the Tigers playing a little harder over the last six minutes and cutting the margin of victory for Acadia to 22 for the 79-57 final.  The bright spot for Dalhousie was first year Guard Hassan Abdullahi who had 16pts on 60% shooting.

The Axemen showed a character and resilence that is reflective of great teams who are on a quest for a championship, they played hard together and for each other. They showed that they understood they were playing without a great player in Owen Klassen, but that their collective is far greater than the individual parts.  They showed that there are individual components to greatness with strong play from Anthony Ashe, Tyler Scott, Jonathan Tull, Brad States, Sean Stoqua and Lauchlan Gale but that the character of the team is greater than the characters in the the team.

They did it with a DEFENSE first mentallity.