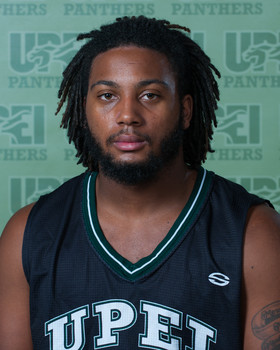 Wolfeville, NS–The second half of the 2013 AUS season opened at Acadia university on Saturday night as the UPEI Panthers showed that the season is going to heat up and be an exciting run to the 2013 championship.

With their frenetic small ball style which was lead by potential CIS Rookie of the Year candidate Deontay Smith, the Panthers got Acadia into a run and gun style basketball they were not capable of playing.

The Axemen jumped on the Panthers with a 7-0 run to start the game leading Coach Kendrick into a time out. From that point, the Panthers never looked back as they ran past Acadia on a 22-7 run to finish the quarter to give them a 22-14 lead they would never relinquish.

The run continued for UPEI in the second quarter, opening up a 12-point edge before Jonathan Tull of Acadia knocked down three triples on four possessions to keep Acadia in the game and close the gap to 36-31. The story of the half was the three ball as the teams put a combined 28 three pointers with Acadia going 6/12 and UPEI going 5/16.

The second half opened with a more consistent scoring pattern as Acadia’s Anthony Ashe and UPEI’s Terrence Brown went at each in a three minute shot for shot barrage that gave the feel of a dog fight.  The air was sucked out of the gym just when a push seemed imminent…Deontay Smith knocked down a 35 foot three to give UPEI and 11 point bulge with six minutes to go in the quarter.

The Panthers sealed the win down the stretch by dumping the ball into the low block to Jeff Doane to score or draw fouls as Acadia jacked threes in desperation.

On the win Geoff Doane stated, “We had a bad Christmas break with our tournament in Toronto (RUNIT) and we wanted to come in here and play hard and together to get the win.”

Head Coach Tim Kendrick returned to his home town and coached a passionate game, giving his Panthers the confidence and edge they needed to knock off the #2-Ranked Axemen.

In other AUS action the Dalhousie Tigers hammered the reeling St FX X-Men 85-59 at Dalplex.