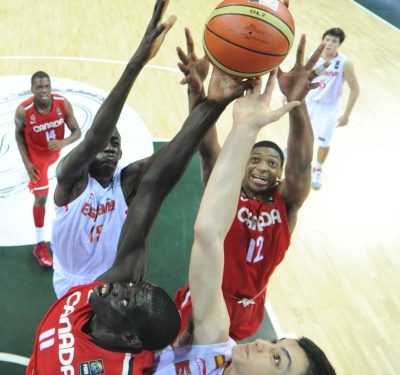 LONDON, ENGLAND – Canada ran into the top ranked U.S.A. basketball team, a team that has won 38 consecutive Olympic games and are the four-time defending Olympic champions in the quarter-finals. The U.S.A. was able to defeat Canada 91-48, and advanced to the semi-finals being played on Thursday. Canada ended the Olympic tournament with a 2-4 record, including wins over the host, Great Britain and the sixth ranked Brazilian team.

In the game, Canada was once again led by Kim Smith who scored a team-high 13 points, followed by Chelsea Aubry who recorded ten points in the game. Krista Phillips was able to grab eight rebounds and added five assists in the game against the U.S.A.

In the opening quarter, the U.S.A. showed why they are considered the gold medal favourite and why they are the number one ranked team in the world. U.S.A. was able to pressure the Canadian team by changing defenses and playing a full-court press during the opening quarter. In the early going, Canada turned the ball over and this helped U.S.A. gain the lead with a 19-8 advantage after the opening ten minutes.

In the second quarter, U.S.A. had no issues scoring baskets. The highest scoring team kept hitting their shots and didn’t allow Canada to trim the lead. Canada was unable to contain the Americans as they kept the fast pace on offence and were making shots on a consistent basis. Shona Thorburn hit a running jumper at the buzzer to end the half; the score was in favour for U.S.A., 42-21.

In the second half, Canada continued to try and mount a comeback like they have done throughout the tournament, but the top ranked U.S.A. team was just too much to handle for the Canadians. Canada played hard throughout the game and never gave up.

Despite the loss, the Canadian Team had a great run at the London Olympic Games. The team was able to qualify for the final spot on the final day on Canada Day, and were able to play many of the world’s top teams very well, knocking off a few in the process . Canada was able to win twice and earned a spot into the quarter-finals which marks a first for the Canadian Women’s Olympic Basketball Team.

The Canadian Team’s Olympics is now complete. Canada will play next year in the FIBA Americas Championship for Women, with a berth into the FIBA World Championships on the line.