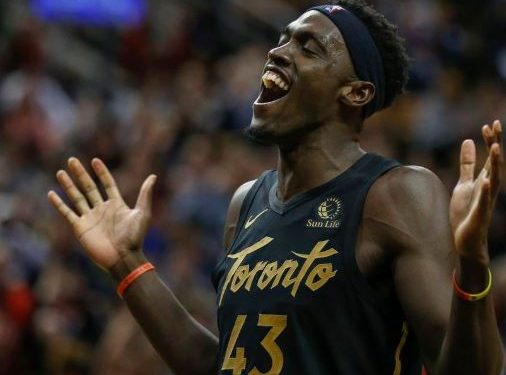 After a long and well-deserved break from basketball, the Raptors were back in action for an abbreviated week. Toronto had been playing well entering the break, but their 15-game win streak is a distant memory and the focus of the league has shifted squarely on the playoff push. While teams are scooping up free agents in preparation of the post season, the Raptors are just looking to stay healthy. During their time off, the NBA had one of its most successful All-Star weekends in recent memory with Coach Nurse, Pascal Siakam and especially Kyle Lowry representing the true North proudly under the bright lights. Now, with the festivities in the rear view, the Raptors are ready to kick off the unofficial second half of the season.

The perpetually rebuilding Suns clashed against the Raptors in the first game for both teams since the break on Friday night. The Raptors looked rejuvenated, sporting fresh tans and haircuts. It was Drake night in the 6 and no one was happier to get back to playing than Pascal Siakam. He exploded with 17 first quarter points, immediately setting the tone. The Raps overwhelmed the young Suns with waves of energetic attacks and stifling defense. Terrence Davis made an appearance with another strong performance. He cut, flashed and blitzed by sleepy defenders. Siakam led all players with 37 points and 12 rebounds, while 6 of his teammates scored in double digits. After giving up a big lead in a free flowing first half, the Suns made a game of it by cutting Toronto’s advantage to single digits in a chippy fourth quarter. But when push came to shove, Toronto did the necessary to pick up another dub.

Only a few weeks ago, the Pacers were threatening the top teams of the conference, but since then, they have fallen to Earth and are desperately holding onto the 6th seed. On the other hand, the Raptors have not skipped a beat since returning from the break. Toronto started the game firing on all cylinders, erupting for a huge 34-12 first quarter and establishing a commanding pace. Kyle was a savant with the basketball, he was feeding his teammates all night, most notably the fire that is known as Serge Ibaka. Ibaka continued his torrid shooting, Lowry secured a double double while Siakam led the way with 21 points. The Raptors were unselfish, disciplined, organized and focused. They attacked the Pacers with impunity and overwhelmed them in all facets of the game. Indiana never stood a chance. 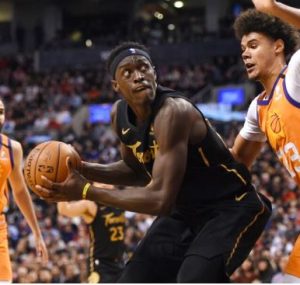 The Raptors are making a concentrated effort to up Pascal’s usage rate heading into the playoffs and so far, he has proven to be able to handle the added responsibility. Siakam’s offensive prowess has been on full display with an incredible scoring burst on Friday and an efficient game on Sunday. Pascal attacked the rim with purpose and has been splashing 3 pointers like his name was Curry. He has brought it on both ends of the floor, using his explosive first step and massive wingspan to cover incredible distance. He is a swiss army knife of talent and was easily the best player for both of Toronto’s wins. 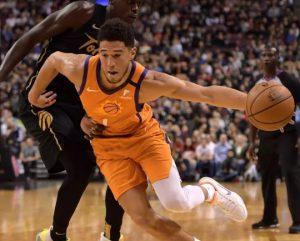 Phoenix’s young gunner has carried the scoring load for years in the desert, but it has yet to translate to wins. He finally has some help in Deandre Ayton, but the Suns have a ways to go before being considered relevant. Until then, Booker will continue to put up numbers comparable to the best in the league. Devin had a solid, if unspectacular, game against the Raptors on Friday night. If he wasn’t instigating the offense, he was coming off curls for quick trigger jumpers. He had excellent lift on his shot and he always stayed balanced and squared to the rim. But against this Raptors team, his efforts were not nearly enough.

Despite being a 6 time All-Star, during the big game, Lowry’s playing time is often cut in favour of some of the more dynamic and fan friendly players. However, with the new All-Star format in place and Coach Nurse manning the bench, Kyle was granted extended burn. Alongside Siakam, he excelled in the 4th quarter, widely considered the most exciting stretch of All-Star basketball in years. Toronto’s Point God managed his side with poise and confidence. Though he didn’t stuff the stat sheet, he came up with dramatic defensive plays including a midcourt steal leading to a Giannis alley-opp and of course, a pair of legendary charges. Few things in life give more joy than an entire stadium exploding in euphoria and a team coming together over a defensive stand. 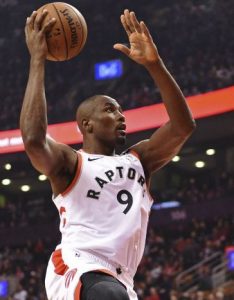 Serge is having a career renaissance in what has been an incredible season for the Raptors so far. He is often featured in the High 5 which is a testament to his exceptional play. In two games, he gave Toronto 31 points and 21 rebounds from the 5 spot. His sound defensive instincts can change the complexion of a game and he always seems to come up with a big block or a crowd provoking tomahawk slam. With his improving 3-point stroke, Ibaka has become the prototypical centre for the modern game.

It’s a showdown of the conference’s best when the Raptors welcome the Bucks to the Scotiabank Arena on Tuesday night. The NBA world will be watching that one closely as it may be a preview of the post season. On Friday, the Raptors will host the pesky Charlotte Hornets before travelling to Denver for a Sunday night matchup against the exciting Nuggets.

What to Expect in Ottawa: Final NPA ...