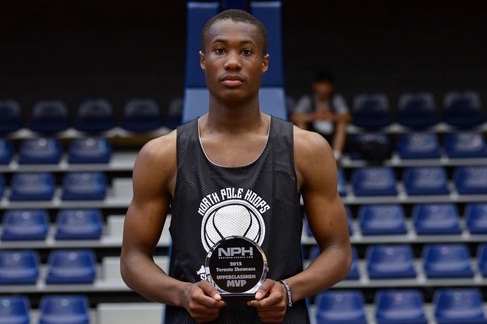 After a very strong Freshman season, Koby McEwen, the 6-4 200 pound point guard for Utah State University, has doubled down with a strong sophomore season. After winning the Mountain West Freshman of the Year award last season, McEwen has now become a leader for the Aggies.

The Toronto native competed in the Adidas Nation Games as a high school senior against the best players around the world. Koby left Canada to pursue basketball at age 15, and played for Wasatch Academy in Mount Pleasant Utah during all four years of high school.

The former CIA Bounce guard is putting up 15.3 points per game, 5.2 rebounds and 3.1 assists. McEwen missed 4 games earlier in the season with an ankle injury, but has bounced back well. On Jan. 31, McEwen dropped a career 31 points against Wyoming. He has played over 30 minutes in all but 5 games since his injury.

McEwen was handed the reigns of the Utah State program from day one as a freshman, and has shown strong progression from his first collegiate season.

“It’s helped me grow a lot. Coming in as a freshman and playing a lot of minutes, I feel like I gained a lot of experience early. The style of play, being a ball-dominant point guard, just running the team has really helped me a lot with getting to know how to play the game the right way.” Koby told NPH.

On the court, the sophomore guard has more responsibility. But, off the court he has seen his role increase as well.

“I’m more of a vocal leader on and off the court. I’m trying to get guys to do the right thing.” McEwen told NPH when speaking about his role development from his freshman to sophomore season.

The 6-4 guard has flashed potential as both a lead guard and shooting guard. He has a style of play reminiscent to fellow Canadian guard, Nickeil Alexander-Walker. McEwen is growing more as a floor general, making him one of the more promising mid-major NCAA players in the country.

Koby McEwen’s growing success is just a sign of the future according to him. He believes Canada is making waves in the world basketball scene.