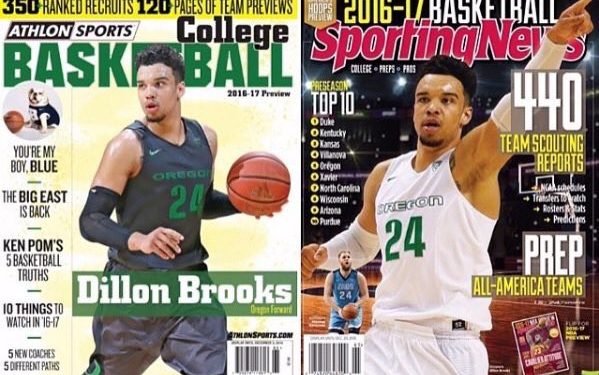 Oregon forward and Mississauga native Dillon Brooks will be  featured on the cover of two NCAA basketball preview magazines, despite undergoing foot surgery this summer.

Oregon's Dillon Brooks is an NCAA poster boy!! Proud of you @dbrookz8 👊 pic.twitter.com/9J33wRchzy

Athlon has already released several cover variations of their 2016-2017 NCAA preview, which features Brooks on the cover representing Oregon and the Pac 12 division. The Sporting News preview will be out on newsstands on September 20th, and features the Ducks ranked fifth in their preseason standings.

Oregon looks to field a strong team this season despite Brooks being sidelined ‘indefinitely’ to start the season, according to his Head Coach Dana Altman.

“He’s going to be out for a while,” said Altman. “He had surgery and we’ll just have to wait and see what the doctors say.”
Despite the grim prognosis, Brooks remains confident that he will return to the court this year, laughing at his ‘indefinitely’ timeline.

To order your copy of the Athlon Sports preview featuring Brooks, follow the link below.