Canada falls to 3-1 against US in pool play 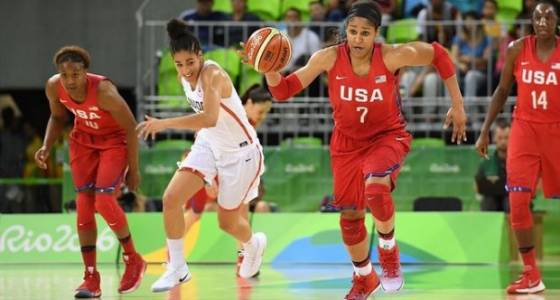 Team USA was led by Maya Moore and Diana Taurasi who both dropped 12 points, while Canada was led by Miranda Ayim with eight points. The win extends America’s win streak at the Olympics to 45 games.

The American contingent of UConn players set the tone for the game, with Moore, Tina Charles, and Taurasi all putting in double-digit scoring efforts. UConn’s Canadian stud Kia Nurse however only added three points, after leading Canada’s scoring efforts in the past two outings.

Canada stayed in reach of the States for most of the first half, but Moore connected on some difficult shots, and despite solid defence from the Canadians, the US pulled away to finish the half up 36-22. Moore rounded out her statline with eight rebounds, four assists and two steals.

The loss drops Canada to 3-1 in Group B and a tie for second place with Spain. Sunday marks the end of pool play for Canada when they take on the Spanish and find out where they finish. The Canadians will advance out of pool play, but will play against different opponents depending on how they finish against a tough squad from Spain.

“They keep this very well in perspective,” said Head Coach Lisa Thomaidis. “They know what this is all about and our eyes are firmly focused on a very tough Spanish team. That’s a game that has some meaningfulness to it for us and we’ll be ready for them.”

Canada takes on Spain on Sunday at 4:45 p.m. EST. Check out olympics.cbc.ca for live streaming or full broadcast details.