East Coast Round Up with Deon Wilson – Edition #2 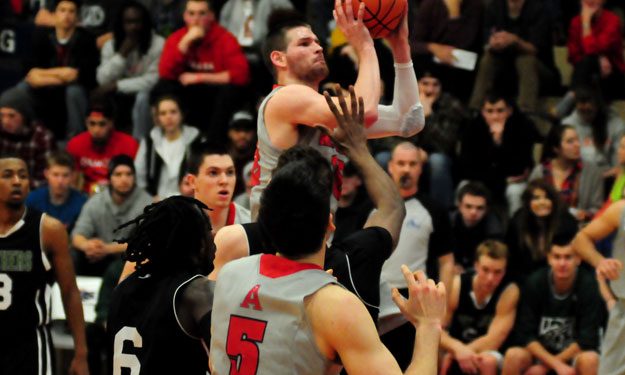 Another packed weekend of hoops, and the big lesson in the AUS is that anyone can beat anyone on a given night, as you will see. On the high school scene, there were some individual outbursts, along with some upset victories in tournament play.

The Axemen and Panthers played games Friday evening and Saturday evening at War Memorial Gymnasium, and what a fitting location for these games. This was a battle on the basketball court. These two teams beat on each other in both games and at times resembled more of a hockey game than a basketball game (not a good thing, but speaks to the intensity of the athletes).

Both games came down to exerting style of play on their opponent. On Friday night’s game the Axemen for the most part were able to manage the tempo of the game and move the ball to create opportunities for themselves. The Axemen came out of the gate with perfect execution on both ends of the floor and jumped out to a 15-2 lead. The Panthers answered with a 17-8 run of their own with a very effective 1-2-1-1 press and the half closed out with an Acadia 5-0 run to give them the 39-30 edge behind Anthony Sears 21 first half points.

The Panthers continued to be aggressive in the third quarter and forced Acadia to turnover the ball and play at a disruptive speed which allowed them to close the gap to five at the end of three quarters. The quarter was highlighted by a Joe Kendrick’s eight-point scoring run that allowed the Panthers to chip at the lead.

However, in the fourth quarter Acadia got back to its precision execution and Anthony Sears imposed his will and dropped a game high 32, outscoring the Panthers 24-13 in the frame for an 89-73 win.

Anthony Sears had a strong weekend for the Axemen | Courtesy: Acadia Athletics

In the Saturday night tilt, the Panthers came out with a vengeance and executed their 1-2-1-1 press to perfection, forcing the Axemen into 18 first half turnovers (WOW).  Ellis Ffrench was the beneficiary of the open looks and led the Panthers with 12 in the half.

Despite the Axemen being within seven at half time, this very much was a game that the Panthers were controlling.  As UPEI continued their signature brand of press and quick shot basketball, the Axemen tried to match this and were completely out sorts as the Panthers extended their lead to 19 at one point in the third quarter and closed the quarter up 72-59.

The Axemen hung around and made mini runs but the Panthers were just too good on this night as Deontay Smith made timely shots and the Panthers forced and out hustled the Axemen to almost every loose ball to win the game 88-80.

The Tigers hosted the X-Men in a crucial game. Dal had a chance to win at the end of regulation as Ritchie Kanza Matta had the tying bucket and the and 1 for the win.  The free throw was missed and the X-Men went on to outscore Dalhousie 9-5 for the 76-72 victory.

Will Donkoh put in an excellent performance as the guard lead his team in points and rebounds with 20 and 7. Cameron Walker chipped in with 11pts and 6rebs.

The one positive for the Tigers was that Simon Marr had a break out game and dropped 24 points and grabbed 7 rebounds. Ritchie Kanza Matta chipped in with 15pts, 7asts and 5stls.

The Capers were also in need of some insurance wins as they hold down the last playoff spot, but were in tough against the very athletic and explosive Huskies. The Capers who have been struggling to score managed to put up 77 points on the night en route to a 77-75 squeaker.

In the second matchup of the weekend the two teams were battling it out through three quarters as the Huskies lead the Capers 49-46 entering the fourth. The offensive woes that have plagued the Capers reared its ugly head in the fourth quarter. The Huskies ramped it up and outscored the Capers 24-9 for the decisive 73-59 win.

UNB made the trip to Newfoundland coming off a rare loss this season and the Sea Hawks were less than hospitable as they looked for their first win of the season.  The 0-7 Sea Hawks showed that they were there to play and jumped out to a 20-15 first quarter lead. UNB took control of the game in the second quarter to go up 38-33 but in the second half the Sea Hawks were having nothing to do with another loss. They were able to keep freshman sensation and CIS scoring leader Javon Masters in check (12pts) and outlasted the Varsity Reds for an 80-76 victory.

Vasilije Curcic led the Sea Hawks with 20 points and 8 rebounds with Daniel Foo contributing 12 points off the bench.

Jordan Irvine who played 14 minutes off the bench led the Varsity Reds with 20pts and William McPhee dropped in 18.

Prince Andrew hosted a solid tournament and put together one heck of a weekend. This team is loaded with talent and good athletes but when I saw them a week ago despite a tournament win at Lockview they were struggling to put it together, but this weekend they knocked off NPH 17th ranked Auburn not once but twice.

Horton advanced to the final with a solid win over Citadel and Charlottetown Rural advanced with a win over CEC.

Charlottetown Rural trailed Horton 79-76 with 34 seconds remaining and knocked in the three ball on the ensuing possession to tie it at 79-79. Gage Sabean missed a three and the game went to overtime. With 2:19 remaining in OT Horton was struggling without any buckets and Charlottetown was thriving now up 86-79.  Charlottetown was absolutely cooking in the extra frame scoring 16 points in 5 minutes for the 95-84 Tournament victory.

NPH Poll: How Would You Grade Andrew ...