Rouge Et Or Drop Citadins for First Win of the Season 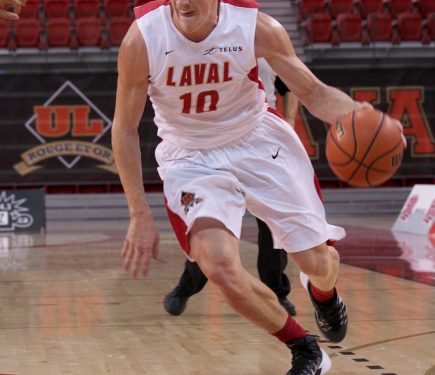 QUEBEC CITY – After losses to McGill and Bishop’s, the Laval Rouge et Or finally picked up a win this season, beating UQAM 73-65 on Wednesday night. They did what they couldn’t do in their first two games, “execute down the stretch.”

Both teams had to make adjustments early on. On Laval’s side, Boris Hadzimuratovic didn’t get the start because of a knee injury. The six-foot-nine center did however end up with more than 20 minutes of play, picking up eight points and eight boards.

“I didn’t really feel comfortable in the first half, but it got better and better, and fortunately, I was able to make some key plays”, Hadzimuratovic said after the game.

The Citadins, on the opposite, were welcoming rookie Rigo Katahwa in the starting lineup, who was out due to a concussion. The Quebec City native collected a total of 12 points in his first CIS game on 4-13 shooting, stretching the floor with three three-pointers.

Laval had the edge on shots beyond the arc though, hitting five shots on 10 tries in the first half. That, plus super-effective defense helped them pull away in the second quarter. After finishing the first quarter tied at 19, the Rouge et Or allowed just six points in the second period to take a 32-25 lead at the half.

UQAM point guard Richard Addai took most of the offensive load for his team, scoring 11 in the first half and adding 16 in the second, as his teammate Alexandre Bernard was struggling. The RSEQ points leader was double-teamed all night and found himself running into defenders when driving to the basket.

“We prepared for the double-team, but Alex was not in control. He took some off-balance shots and it’s not his style”, said Citadins coach Olga Hrycak.

He didn’t get much help from Philippe Tamba either, who managed only six points after him and Bernard dominated in UQAM’s first three games.

The Citadins kept fighting, as Laval took two 10-point leads in the second half only to see them come back every time. Addai, an ex-Rouge et Or, was a big reason why, as he hit shots from everywhere, going 10 for 17.

“We let him operate a little too much,” said Laval coach Jacques Paiement Jr. “This is a team that, if you let them build momentum, if you let them get in rhythm, they become very difficult to defend.”

UQAM even took the lead at one point, 63-62 with less than five minutes to go, but ultimately they couldn’t close it out. “We made big mistakes at the end”, said Hrycak. “We missed a couple of layups, let them penetrate, and they scored a couple of layups. It comes down to this.”

Laval closed out on a 7-0 run, thanks to huge plays from their bigs Boris Hadzimuratovic and Antoine Beaumier, to win it 73-65. “We had our game plan and I think we executed it pretty well, especially down the stretch. We executed well offensively and defensively, and scored timely baskets,” said Paiement Jr.

The Rouge et Or grabs third place from UQAM with a record of 1-2, as they’ll play their next game Friday night at Concordia. “It feels good to finally get a win. It was not elegant, but it feels good. We’ll learn and build on this”, Laval coach said.

As for the Citadins, they’re done with their first part of the season, going 1-3, as they’ll play their next regular season game only in January.