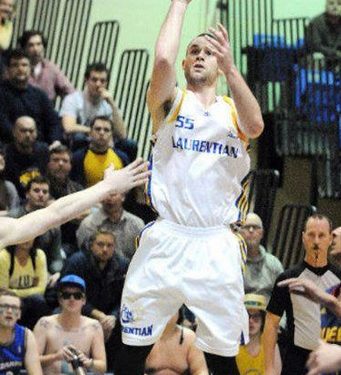 The Laurentian Voyageurs have lost 41% of their offensive production with the graduation of starters Manny Pasquale (17 PPG) and Georges Serresse (16 PPG).

Pasquale, who has been a staple for the Laurentian Voyageurs, averaged 17 points, 3.5 rebounds and a team-high 4.7 assists per game last season, displaying more of his playmaking abilities, prior to leading the nation in scoring (2011-2012) averaging 26.3 PPG.

Alex Ratte will lead the way for Laurentian

“Everyone thought Manny could only score, but he is a very good passer as well; he doesn’t have to focus on one thing,” LU Head Coach Shawn Swords told NPH.

To most of the OUA, the emergence of Alex Ratte came out of the blue, as the scoring guard averaged a team-high 21 points per game, good for fifth in the nation. For Coach Swords, it was no major surprise, as Ratte displayed progress leading up to last season.

“Every year he has made leaps and bounds. Teams know him already, the thing he is going to adjust to is Manny not being there; no question , I think he will make the adjustment, he has all the tools,” said Swords.

Ratte is a fifth year student, but entering only his third of eligibility, as he sat out the first two years to focus on academics. Entering his final season, Ratte along with Josh Budd, Nelson Yengue and Tychon Carter-Newman are expected to lead the way.

Offensively, expect nothing less of Ratte, who has a system catered to individual strengths, allowing for creativity in the offense.

“Alex is a very good one on one player, he has some polished moves and if you’re not set defensively, you’re going to struggle against him,” explained Swords.

Outside of returning players, Laurentian brings in two international prospects in Henry Williams (South Africa, via Victoria) and Gheric Uneau (Guataloupe). Freshman David Aromoloran (Brampton, ON) will also have a chance to step in, contribute and develop as a potential key piece for the future.

Although Laurentian has lost major contributors to graduation, Swords is content with the current group he has, as half the team remained on campus throughout the summer to put in work and develop.

“We want to work hard and get better as the season goes on. In the last two years, we lost to Carleton in the playoffs at CU. We want to improve on our record and hopefully host a play off game.”

Roles will undoubtedly change with players like Pasquale and Seresse no longer in the mix. As a result, opportunity will open up for more ‘break out’ seasons.

True Growth of Canadian Basketball or A ...