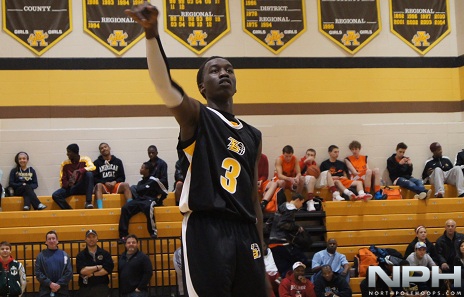 NPH has witnessed Munis Tutu (Windsor, ON, Canada) consistently distinguish himself at every event including the NPH Windsor Showcase, Detroit Motown Showdown (Team Boltt) and most recently at Nike Peach Jam (The Family), despite a poor team showing.

Tutu quickly shot up the NPH National Player rankings, currently sitting at #3 behind only Chris Egi and Montaque Gill-Caesar. He is the best Canadian PG in the class of 2015 as far as we’re concerned. But where does he stand in America?

In every setting, he has been arguably the best player on the floor thanks to elite playmaking abilities, great feel, defensive instincts, body control, athleticism, speed, handle, killer instinct; you name it, he’s got it. We can confidently say he’s the total package PG.

Munis Tutu currently holds offers from Binghamton, Charleston, Detroit, Kent St & UMass, along with Iowa State, Butler and Auburn expressing heavy interest. It won’t be long before the high-major programs come in packs after the PG from La Lumiere.

Tutu is running with The Family in Vegas at the Elite 8 tournament.

In the past, we have compared him to fellow Canadian PG Myck Kabongo, however Tutu is further along in his development already possessing a viable jumper and very good athleticism.

It’s a big statement, however warranted. If Munis Tutu is not the best 2015 point guard in America, he has to be one of them. And he’s Canadian.