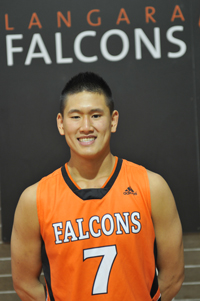 Vancouver, BC – During the preseason, we tabbed the Langara Falcons as the top team in the PacWest, and as one of the most talented teams in the entire CCAA. On opening night, in front of a ruckus home crowd, the Falcons did not disappoint, running all over the over-matched Douglas Royals 93-61.

The beauty of the Falcons offence is in its simplicity, and Coach Paul Eberhardt summarized it in two words: “just go”. The game plan worked to perfection on this night, as it should on most, because Langara has great depth, big men to spare, solid wing scorers, and a point guard in Brody Greig that keeps everyone involved, hardly looks for his own shot – but is devastating going to the rim, when he chooses to – , and rarely makes mistakes.

Even playing without 6’7” centre Jitt Lohcham, the Falcons bigs controlled the glass and did a great job of starting the break. Coach Eberhardt said that in a game where he wanted to attempt to create offence only in transition, and rely on half court sets as a last resort, he had a simple message for his big men:

“We tell them, just keep running. Rebound and run, and eventually the way we play you’re going to get easy layups.”

The Falcons were led by two third year big men: 6’4 forward Garrett Ling-Lee who had 20 points in a starting role, and 6’5” centre Devin McMurtry who added 13 points and 10 rebounds in just 17 minutes off the Langara bench.

6’5” guard Elliott Mason, who missed the team’s final preseason game with an injury, looked good in his return to the lineup, posting 16 points on 7-15 shooting in just 20 minutes of work.

With the win the Langara Falcons move to 1-0 on the season, and are next in action when they host Comosun College and Vancouver Island University November 9th and 10th.