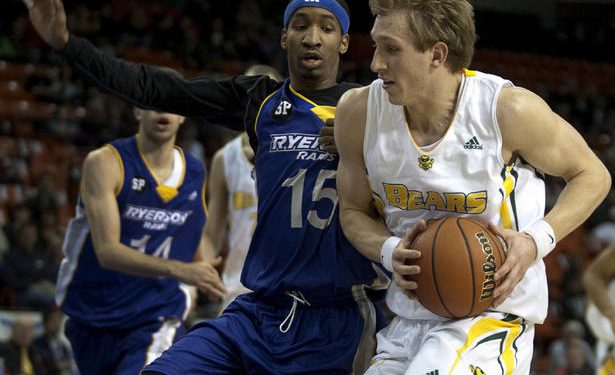 Baker looked extremely comfortable anywhere on the floor as he cruised to a near triple-double performance, while Ferguson launched from deep and was stuck on automatic.

Baker took total control of the opening quarter scoring ten points to get the offense going for Alberta. Ryerson was slow to respond as they couldn’t find any offensive rhythm for the beginning part of the quarter. As the first frame progressed, Jahmal Jones started to get involved for the Rams.

The Ferguson and Baker combination which has been so deadly all season, continued through the second quarter as the Golden Bears dominated the first half of play. Baker was driving to the basket and playing hard defense, becoming a force on both ends of the floor.

Ferguson was knocking down shots from way behind the professional three point line all quarter long.  Ferguson connected on five shots from behind the arc in the second quarter alone.

“When we shot around earlier today the room felt kind of big, and coach was laughing at it and he was hitting shots too and the gym felt good, guys were finding me and they had to key in on Jordan t0o and I was just knocking them down.”

Baker had scored 20 points and Ferguson had 21 to make a statement; heading into the halftime break the Golden Bears lead the Rams 49-25 and were in total control.

Ryerson was down by 24 at half but continued to battle hard.  Starting in the third quarter they got on an 11-0 run led by Aaron Best who connected on two three pointers.

At that point Alberta had seen enough and shut the game down from there on, dominating a majority of the fourth quarter with a 29-4 run. Alberta finished out the game strong with a score of 81-52

Jordan Baker spoke to NPH about the quick start. “We had a few games earlier this year where our opponents came out and gave it to us and we were on our heels for the game and we just don’t want to be out there playing reactionary basketball.  We want to be the ones that set the tone and establish everything right from that opening tip and I think everyone did a great job.”

With the victory, Alberta will advance to the championship semi-final where they will face the winner of St. FX and Concordia.  With the loss Ryerson moves on the consolation semi-final side.