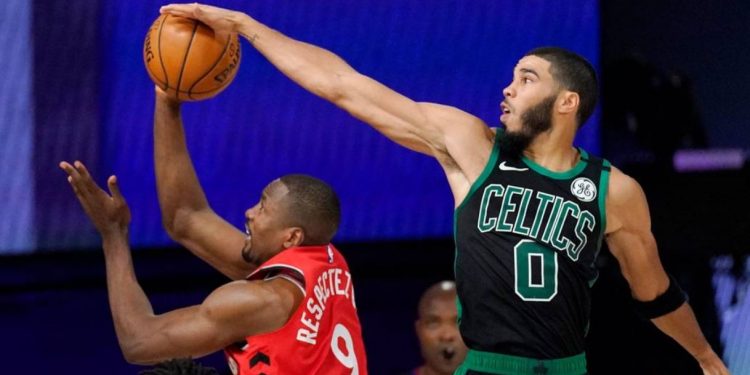 The hot takes and opinions about this series are running rampant as experts debated to determine who really had control heading into Game 5. On the one hand, Boston was a miracle shot away from being up 3 – 1 but on the other, Toronto would have had the advantage, if Marcus Smart did not catch fire in Game 2. One thing is for sure, the Raptors were playing with confidence while the Celtics were searching for someone to play Robin to Tatum’s Batman.

After battling to a draw in 4 games, the pressure fell on Coach Stevens and Coach Nurse to make adjustments. The obvious change was for more triples, both teams fired at will from distance, but only the Celtics were hitting. The next was intensity, where Boston dominated as well. They closed the lane for Lowry and challenged every shot. Boston’s spectacular half was highlighted by a massive Jaylen Brown sledgehammer. Their aggression had Toronto shook through the first 24 and facing a 27-point deficit. The Raptors played marginally better in the second but could never close the gap. The onslaught continued throughout the night; Boston showed no mercy. This game was unbearable to watch.

Fred VanVleet fought through Boston’s tough defense to lead his team in scoring. He couldn’t find the range from deep and instead earned most of his points from the line and on drives. Fred showed decent fight throughout most of the night, but it was not nearly enough. 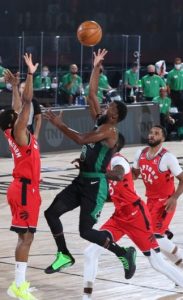 Kemba took Game 4’s loss personally. He was frustrated that he only took 9 shots and was essentially a nonfactor in defeat. He looked motivated from the tip and his aggression paid off with an excellent performance. He navigated Toronto’s defense with ease, waving ‘hello’ to the Raptors defenders as he smiled his way to the rim. Walker looked like he had the time of his life out there. 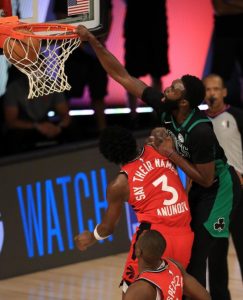 Brown paired with Walker and Tatum to be the third prong to Boston’s devastating attack. He danced his way through Toronto’s defense and found shots available everywhere. Brown played with unbridled energy; he outdueled his opponents with the unpredictability of a firecracker. He was crafty and explosive on his drives with a soft touch. Brown was a difference maker tonight. 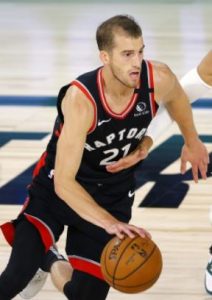 Coach Nurse called Matt Thomas’ number to provide a spark off the bench. Thomas hustled around screens and knocked down a couple of jumpers to stretch the floor. His real purpose was to pull defenders and open space for others, but he worked hard in his minutes. Unfortunately, his results were like trying to put out a fire with a drop of water.

Norm was a lone bright spot off the bench for Toronto. He contributed 16 points in 31 minutes. Powell knocked down 3 triples, but it took him 11 shots to get them. He threw in a handful of assists (3) and looked engaged but he couldn’t make an impact.

It’s ‘do or die’ for Toronto as their backs are firmly against the wall. Boston landed a haymaker with this win and the Raptors urgently need to regroup. The Celtics look dangerous, they can clinch a trip to the conference finals with a win on Wednesday night. It’s time for the champs to leave it all on the floor in their most desperate game of the season.

Bubble Raps – The Raptors even up ...