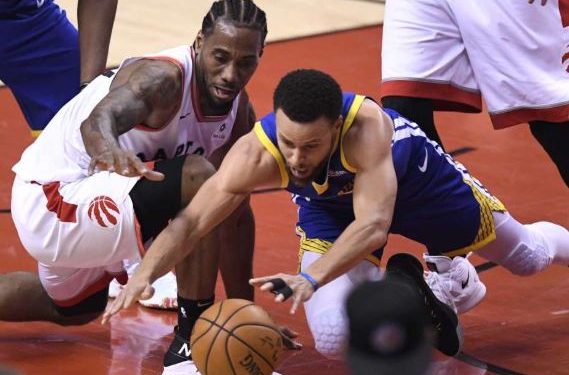 Up 3-1 and playing in front of a ravenous crowd, the Toronto Raptors were at the brink of greatness with the momentum of a million voices at their backs. They were attempting to turn the unimaginable into reality and complete Masai Ujiri’s magnus opus. But the Warriors were not going to succumb to fate quietly, they still boasted the leagues best backcourt and tonight they welcomed the return of their most lethal weapon, the Slim Reaper himself, Kevin Durant. Golden State became a completely different team with Durant on the floor, they oozed confidence and swagger, starting the game white hot from distance. The dramatics soon followed as Durant got right into the face of folk hero Fred VanVleet after a chippy foul call late in the first. However, the complexion of the game changed entirely when Durant re-hurt his injured leg on a seemingly innocuous play. Despite losing KD, the Warriors did their best to keep Toronto at bay, taking a 6-point lead into the break. In the second half, a familiar trend reappeared as Toronto could not stick a jumper which opened the door for the Warriors to extend the deficit. If the Raptors converted on a fraction of their attempts, they would have enjoyed a comfortable lead but instead, they had to fight tooth and nail to keep pace with the splash brothers. Down the stretch the Raptors fought furiously to trade leads with Golden State in dramatic, edge of your seat basketball. The game came down to the final seconds, Toronto was down one point when the ball found its way to Kyle Lowry in the corner. With the game and the series on the line, Draymond Green came screaming over to deflect Lowry’s shot at the buzzer. The Warriors live to fight another day; they absolutely stole this victory and now force a Game 6 back at Oracle. 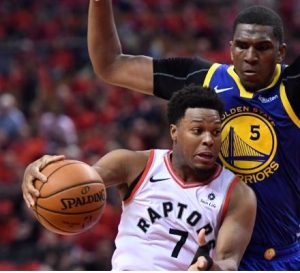 Kyle Lowry led his team with 42 minutes of aggressive basketball. He hunted his shots, nailing 8 of his 16 attempts overall but he missed 5 of his 6 looks from deep. Lowry brought his gritty edge to the game and did a decent job tracking the Warriors deadly duo. Kyle nearly made his dreams come true but was unable to make the game winning shot, a moment that will no doubt replay in his mind again and again. KLOE filled the stat sheet with 18 points, 4 rebounds, 6 assists, 2 blocks and a steal. He played a fantastic game, but he would trade it all for one more chance at that game winner. 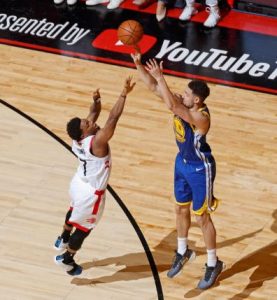 Klay Thompson flanked Steph Curry and together they dropped napalm all over the 6. He nailed dagger after dagger from deep to frustrate Toronto’s defenders. He has successfully shrugged off his leg injury and returned to his All-Star form as his shot looked as svelte as ever. Klay had more lift in his step, and he used the extra bounce to stay on his man and contribute in different facets of the game. Thompson had 26 points, 6 rebounds, 4 assists, and a steal in 42 heavy minutes. Klay brought a healthy dose of arrogance, but he was able to back it up with expert marksmanship. The Warriors are blessed to have not one, but two, of the greatest shooters of all time. 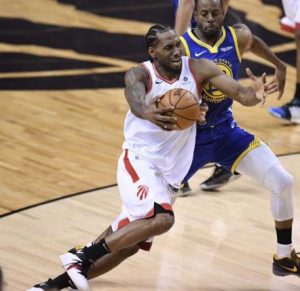 Kawhi Leonard did a bit of damage in the first but was quiet (by his standards) for the majority of the game. He did excellent work on the glass coming up with 6 offensive rebounds but gave a few of them back with 5 sloppy turnovers. Towards the end of the third, he started to create some action with persistent drives to the hoop and trips to the line. This was a poor shooting night for Leonard, but when it mattered most, he came up with massive plays. Down the stretch, Leonard knocked down a pair of ice-cold triples to rile up the crowd into a raucous state. The Klaw had a double-double with 26 points, 12 rebounds, 6 assists, 2 steals and 2 blocks. The energy of the building swelled behind his incomparable talents, everyone was ready for him to take over, but Kawhi showed that he is actually human and, for once, failed to bring home the victory.

Marc Gasol has battled in basketball wars throughout his entire career. Whether it was the grit and grind of the Memphis Grizzlies or the dominance of the Spanish national team, Gasol is used to playing on the biggest stage. He scored 10 points in the first quarter alone to send an early message. Marc was not getting the benefit of the whistle, but he stuck to his game and slowly started to shift the center advantage in his favour. Gasol had 17 points (including a pair of triples), 8 rebounds and 2 assists. Marc picked up some brutal fouls that limited his effectiveness, but he did a fantastic job staying on the floor against the more athletic Warrior lineups. 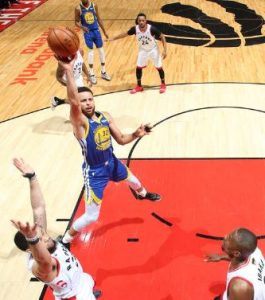 Despite the influence of the Durant circus, the Warriors have always been Steph Curry’s team. When KD went down due to injury, Coach Kerr turned to his leader once again. Steph responded with a heroic effort, putting the Warriors on his shoulders to lead them in scoring and to draw the attention of second and third defenders whenever he was on the court. Curry darted all over the floor, baiting ticky tack fouls on slower players and drilling back breaking 3’s. Curry flirted with a triple double, he ended his night with 31 points, 8 rebounds and 7 assists. With Durant ruled out for the rest of the series, Steph will now be the definitive focal point for Golden State. Steph has been the Warriors one constant; he is a dynamic player that never lost confidence and carried himself with a champions pedigree.

This was a heartbreaking loss, but the Raptors will not have time to dwell on it as Game 6 will tip off in Oakland on Thursday night. The Warriors will be missing some key pieces but should get a lift from their crowd. Toronto will need to bring a better effort if they want to win this series on the road.

What to Watch For? Ottawa NPH Showcase ...