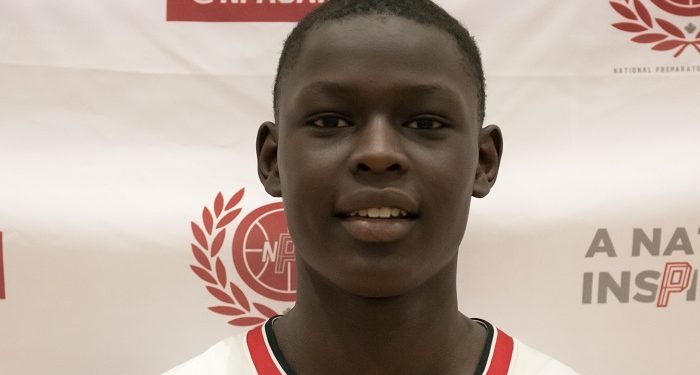 Kur Jockuch’s philosophy is simple; outwork the competition and people will notice.

This past National Preparatory Association (NPA) season was a testament to that. In just one short year, the 6’9 Center out of St. Thomas, Ontario, propelled himself from a completely unknown prospect to a critical x-factor for one of the nation’s best high-school programs.

In his first NPA campaign, Jockuch averaged an impressive 8 points, 10 rebounds, and 2 blocks per game; all a reflection of the consistent hard-work that he had put in prior to the season.

Heading into the season, the London Basketball Academy (LBA) coaching staff felt that Kur had all the right tools to be an impact player for the program. However, he was far from ready, physically, to be put in a position to compete against Canada’s best.

“Kur only had one year of eligibility left,” said his Head Coach. “So we took him under one condition; that he attend workouts beginning last March and commit to a weight training program.”

Jockuch took the condition as a personal challenge, with hopes to not only crack the LBA rotation but cement his status as one of the team’s best players. Throughout the offseason, he worked closely with former SFU standout Michael Provenzano, who trained him and monitored his progress with respect to becoming a stronger, more agile player. Moreover, he refined his post-play with former Dallas Mavericks trainer and current Head Coach of Grace Christian Academy, Brandon Clifford. As the summer came to a close, Jockuch transformed into a more complete player while adding over 15 pounds of muscle to his frame.

From early on, Jockuch recognized that the primary hurdles he would face when transitioning from his local high school league to the NPA had little to do with his skill, and more about his conditioning as an athlete.

“The biggest challenge was adjusting to the game speed and competing on a strength basis,” says Jockuch. “I was learning to play at a new speed and the players were much stronger than what I was used to. This took a lot of wear and tear at first. I really started to eat right and focus on taking care of my body – basically taking care of all the little stuff.”

Kur’s dedication to evolving his game, both on and off the court, didn’t go unnoticed by his teammates.

“Coach Provenzano picked Kur up near the end of last year, and at first I wasn’t sure what he’d seen in him”, says Denzel Cummins, NPA All-Star and LBA’s starting point guard. “But I came down for a workout in the summer and Kur was a whole different player. His chest was bigger, he was much more athletic, and he was dunking everything. I think Kur is the best big man in the league.”

As the season progressed, it became apparent that Jockuch wasn’t like most big men. He was running the floor like a guard, using his quick hands to disrupt passing lanes, and had incredible footwork – all of which stemmed from playing multiple sports throughout childhood. As a soccer player he learned the importance of footwork and developed the ability to consciously control his foot movements. As a track star he was able to develop the correct form for sprinting. On top of this, his experience with football gave him a competitive edge, aggressiveness, and the ability to change speeds on the fly. With the help of the LBA coaching staff, Kur learned how to apply these skills to the basketball court.

When asked about Jockuch, Provenzano raves about him both as a player and a person.

“Kur’s best qualities as a player are his activeness as an offensive rebounder and his timing as a shot blocker. On top of this, he’s the fastest guy on the team; he can run the floor for like a guard. Off the court, Kur is a soft spoken kid and appreciates all the hard-work that others have put in for him. He’s been working on the side to pay for some of his expenses.

In speaking to Kur, it’s easy to see that both hard work and gratitude are staple attributes that the 17-year-old possesses. Growing up in St. Thomas, Kur spent his childhood in a neighbourhood where basketball was beloved. With more players than courts, teams would fight long and hard to not only win, but secure their chances of playing by staying on the court. Wins meant bragging rights, and bragging rights meant pride.

“Growing up our mentality was kill-or-be-killed. That mentality has stuck with me since then because even though there are a ton of skilled guys in the NPA, when they face up against me they’re going to have to earn everything they get. I won’t allow anyone to out work me”

Prior to joining the LBA this season, Jockuch had garnered little interest from university coaches. However, heading into the AAU season where he will suit up for Canada Elite, Kur has received several offers from schools across the nation but still remains uncommitted.

In a league permeated with big-name talent, Kur Jockuch has quickly started to establish a name for himself. But behind his rapid ascent are countless hours spent in the gym, a commitment to learning the intricacies of the game, and doing all the little things necessary to ensure his body is physically ready to compete in at the highest level of basketball. Though Kur gets all the credit for the countless hours he’s put in to perfect his craft, he likes to divert the attention to those that have helped him reach this point.

“All of my success has come from those who’ve helped me throughout this process – the LBA, Gold Medal Basketball, Gary Myers, The Provenzano family, Moe and Elaine Brennan.” says Kur. “Those people mean a lot to me, without them I wouldn’t be where I am today.”