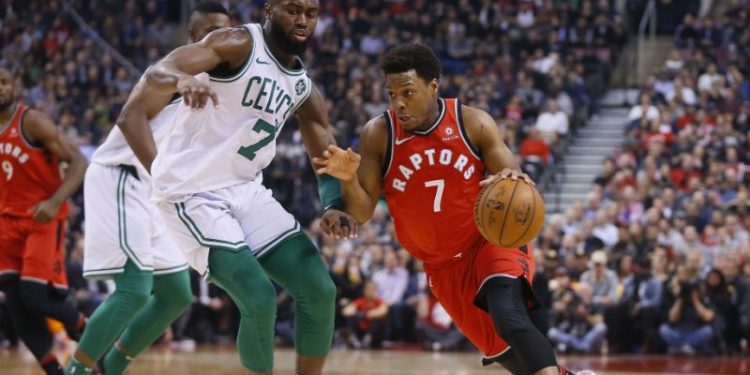 The Toronto Raptors made the biggest statement of their season yet, crushing the Boston Celtics 111-91 on their home floor to move within a game of first place in the Eastern Conference.

The last time the Raptors met the Celtics, on Nov. 12, things were quite different.

Toronto were still in the early stages of implementing their new offence, Kyrie Irving was absent, and the benches of both teams weren’t quite yet what they are now.

The Celtics won on their home floor on that night, taking advantage of an anemic Raptors fourth quarter offence.

In case you need a reminder, Toronto turned the ball over just once in the final five-and-a-half minutes, but that was mainly due to the fact that they put the ball in DeMar DeRozan’s hands and went away from the even distribution that has been stressed upon for the 2017-18 season.

Head coach Dwane Casey was mindful of that fact coming into this one.

“You can’t stand, when we played them earlier in the year, we were standing a lot,” Casey said after practice on Monday. “We weren’t moving the ball, we weren’t sticking with our triggers and executing offensively. You’ve got to execute, you’ve got to screen, you’ve got to space. You can’t have two guys standing next to each other. I know it sounds simplistic but spacing is huge. It will be very, very important against Boston.”

That must have been the message in the locker room as well, as the Raptors came out doing all of those things right from the tip, and if not for an atypical first quarter from DeRozan, they would have likely had more than a four point cushion to carry over into the second.

Kyle Lowry had one of his best performances of the season, scoring 23 points, grabbing eight rebounds and distributing four assists in just 25 minutes of action. He made six 3-pointers before resting in the fourth quarter, and pushed the ball at every opportunity.

He made several key plays defensively, changing things up by getting in passing lanes instead of his customary sacrifice of the body for charges.

That aggression seemed to inspire the bench unit, as they came out intent on stomping on the Celtics’ throats.

Before the game, Brad Stevens interestingly enough had some very complimentary words for the Raptors bench unit. “There’s not many groups I enjoy watching more than the [Toronto] second group when they’re all on the court together, the way they play, the way they move the ball, and the way that they cut.”

Led by Delon Wright and Fred VanVleet, Toronto’s lead swelled past 20 in the second quarter and the statistically best defence in the league finished the quarter conceding 36 points.

Both VanVleet and Wright made a concerted effort to attack Kyrie Irving off the dribble and continually broke down the defence to create scoring opportunities for both themselves and their teammates.

The Celtics had no answer. While there’s still a certain predictability in the way the Raptors operate with the starters on the court, the all-for-one and one-for-all approach that the bench unit brings makes them not only impossible to anticipate, but the lack of gravity of any one player ensures that the ball never sticks for too long.

This is a mark of the progression this team has made in a couple of months, winning easily on a night when DeRozan only managed 15 points. The Raptors managed 29 assists in all, another sign of encouragement, and the Air Canada Centre remains a fortress as Toronto improves its home record to 22-4.

Anthony Bradshaw – Point Guard in a ...