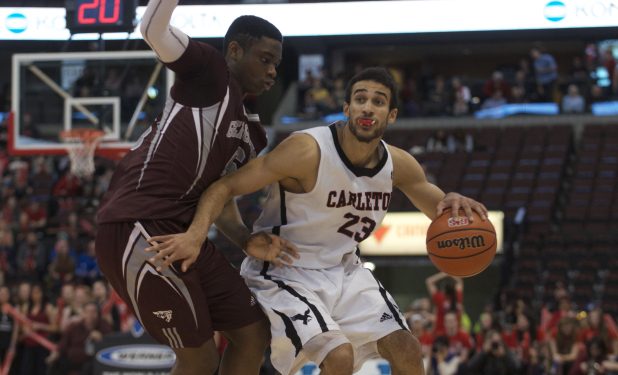 The defending Canadian University basketball champions are back at it again.

Carleton enters the CIS Final 8 as the top seed, earned with their Wilson Cup title in the OUA championship’s 103-59 drubbing of Windsor.

Dave Smart’s Ravens will open the CIS Final 8 against Saskatchewan Thursday starting another run that could net them their 11th national title in 13 seasons.

As it has been for the past four years, the Scrubb brothers will lead Carleton in everything they do while trying to become just the fourth and fifth players to win five CIS basketball titles.

It would also be Carleton’s second five-peat in program history.

Thomas Scrubb picked up the Wilson Cup MVP after averaging 17.2 points (including an absurd 50% shooting from three) and 7.6 rebounds for the season.

Phil Scrubb dominated the OUA Final controlling the floor and finishing with 20 points after averaging 16.6 this season. Both Scrubbs were named OUA First-Team All Stars this year and both are former CIS Final 8 tournament MVPs.

“I’m pretty comfortable playing with him, I’ve done it my whole life,” Phil told NPH about his relationship with Thomas. “Usually he knows what I like to do best and I know what he like to do best so we know each other pretty well so we don’t have to guess.”

The finale to the Scrubb era at Carleton should make for some CIS drama on the national level.

Often the lack of interior presence has forced Carleton to run four guards to space the floor with Thomas patrolling the middle as de facto combo-forward on offence and rebounder on defence, earning OUA Defensive Player of the Year.

“I think we’re a bit more athletic and can get out in transition a bit more this year,” said Scrubb.

Carleton’s defence has been nothing short of stifling allowing a CIS-low 56.4 points per game. The Ravens offence has soared as well averaging 91.1 points, third in the nation.

Connor Wood has become a solid third option on offence, averaging 13.4 points and shooting 47.8 per cent from three. Wood was named an OUA Second-Team All Star this season.

Ryerson is playing at home. Windsor will be looking for revenge. Ottawa plays them tougher than anyone. But while the rest of the OUA may challenge Carleton for the CIS title, they’re still chasing the Ravens who have to be considered favourites.