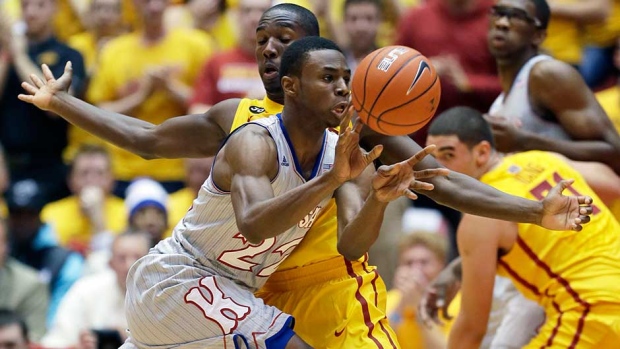 “I had a talk with my father, he told me just stay aggressive, rebounding is the key, so I was just trying to focus in on it,” the Vaughan, Ontario product told ESPN in the post-game.

I tend to have the “Wiggins conversation” on a weekly basis with basketball people in the Canadian scene (media, coaches, players) and one thing I have remained consistent in saying is that during BIG 12 conference play, he will begin to truly blossom, as every game is a battle.

Against ISU, it was only the second time this season that Wiggins posted double figure rebounding (11 against Florida in Dec) but you could expect this number to climb, along with his energy level defensively.

Although Kansas has had a relatively strong non-conference schedule, BIG 12 competition is a different beast that will bring out the best in him, and ultimately prepare him for the next level.

To highlight my point regarding the conference, with only a few a games in, there is just one undefeated team in BIG 12 play–Kansas at 3-0.

There are currently 5 nationally-ranked teams in the BIG 12.

Melvin Ejim (Brampton, ON) struggled from the field (5/15 FG) but still managed 15 points (behind DeAndre Kane) five rebounds, and three steals. Naz Long (Mississauga, ON) was inserted into the starting line up, however scoreless in 16 minutes, with three rebounds and an assist.