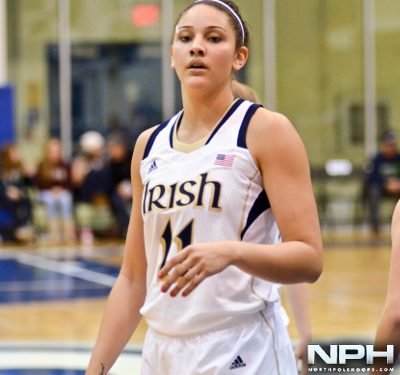 Editor’s Note: Natalie Achonwa is the first EVER @NorthPoleHoops female diary holder. Canadian basketball is more relevant today than ever, as you probably already know. But what you may not know is that Canadian female players are surging just as much, if not more than their male counterparts, having already qualified for the 2014 FIBA World Cup as well as participating in the most recent 2012 London Olympics (a team that Achonwa was a part of). The Guelph, Ontario product is an ideal role model and representative for Canadian basketball on the female side. For the rest of the NCAA season you will get to know Natalie Achonwa on and off the floor. The NPH team is thrilled to have her on board!

P.S you can expect more Canadian Women’s basketball coverage in 2014!

To start things off, I thought I’d give you the traditional background info. My name is Natalie Achonwa, but I go by Nat or Ace. I am 21 years old, I was raised in Guelph, Ontario, I am the middle child of 3, I attend the University of Notre Dame, I have a puppy named Bentley, and I play basketball for fun.

When I was presented with the opportunity to be a diary holder for NPH I honestly had no idea (and still don’t know) what I was going to say. Beyond the daily schedule of going to class, practicing, working out, and studying, my life is currently pretty routine. However, I am still super excited and honored to be the first female basketball player to join the NPH blogging crew!

I guess the best way to get to know a little about me is to start from the very beginning. Growing up as the second oldest I always wanted to do what my big brother Adrian did. Since he played soccer, I played soccer. When I was around the 5th/6th grade he started to become interested in basketball, which meant so was I. (It also helped that around that time I had a random growth spurt and was 5’7 at 10 years old.) Lets just say the beginning days were not so pretty and it’s taken a lot of hard work to get where I am today.

With that being said, it has been a blessing to my development as a person and as a basketball player that I have been through almost every level of Ontario and Canada Basketball programs that were in place while I was growing up. From the CP Program to OBA’s to the National Team Programs, I have been fortunate enough to learn from, work with, and establish relationships with some of Canada’s greatest.

Beyond being from the best country in the world…. I also play in the NCAA at a school just south of the border.

Sadly enough, this 2013-2014 season will be my senior year, and final season, at the University of Notre Dame.

When I was initially going through the recruiting process, selecting a university to go to was the hardest and biggest decision in my life. I wanted to find a school that had a respectable academic reputation, was close enough to home that my family could come to games, and, finally, that had a prodigious basketball program. Luckily, I found that in Notre Dame. No doubt, these past three years have had their ups and their downs, but I wouldn’t change any of it for the world. Coming to ND has been the greatest decision in my life – on and off the court.

Last weekend, when I was initially supposed to be writing this blog post, I was actually back in Toronto. Every year, Coach McGraw, my head coach, likes to allow the seniors to have one last “home game” where they are able to play close enough to home that their families and friends can come watch.

Since I am the only international player, it was kind of a big deal that we got to go all the way “up” to Canada. It was one of the greatest feelings to be able to play in front of so many familiar faces. People that I had not seen in years, coaches that coached me when I was in middle school and high school, old teammates and old friends…it was literally like #ThrowbackThursday in the gym!

But even after our wonderful trip to Canada, we’re back on the road again. This week is the Big 10-ACC challenge and we’re playing Penn State! Until next time…

“The greatest glory in living lies not in never falling, but in rising every time we fall.” –Nelson Mandela