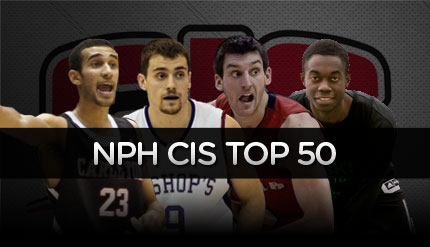 The 2013-2014 season has kicked off, and our North Pole Hoops correspondents are situated across the country to take in the live action, throughout the entire year.

In sports, winning is everything.

With that being said, the #NPHTop50 holds heavy weight when it comes to production at the highest of levels (winning teams).

However, impressive individual production at lower levels (losing teams) is also considered, to a lesser degree.

While winning and production are big factors, the strength of conference must also be considered.

For instance, the 2012-2013 season witnessed players register staggering statistics throughout the year, but when it came to nationals, against the strongest of competition, true colors came out. Some stepped up, while others were unable to adjust and wilted under pressure.

Simply put, the month of March separates the men from the boys.

Team success breeds individual success — we at North Pole Hoops strongly believe in this phrase, and if you dig deep to analyze the list below, you will notice our efforts in remaining consistent with this approach.

Winning must be rewarded.

To further analyze and compare a player, the NPH team dives into head-to-head match ups, which give a good indication of how each player performs when on the same floor, “mono-e-mono.”

While statistics paint a good picture, they don’t tell the full story. Live Game analysis allow us to identify a player’s intangible traits [toughness, playmaking in the clutch, coachabiilty, character and communication] and all come into play to help further distinguish mediocre from good, and good from great.

Throughout our travels, the North Pole Hoops team has been able to pick the brains of the industry’s brightest minds—both in Canada and America.

As far as the CIS is concerned, the aggressive tracking of teams and players across the country has allowed us to consult with and learn from coaches [Head and assistants] former CIS all-Canadians, as well as various observers of the league from coast-to-coast.

The #NPHTop50 depicts the league, as we see it, following an unparalleled contribution of time, energy and research into CIS basketball. This list is heavily based on 2012-2013 production and results, so you can expect a shake up in release #2 in January.

In the meantime, please leave a comment below to express your opinion.

Connect with @NorthPoleHoops on Twitter and get involved in the discussion, using the official hash tag #NPHTop50

The first edition of the 2013-2014 #NPHTop 50 features those that played and produced as of last season in the CIS.

However, the following is a list of new names to the league that you will be hearing about throughout the year and can expect some to pop up in the Top 50 as of January.

That being said, the CIS is much stronger with this influx of talent.