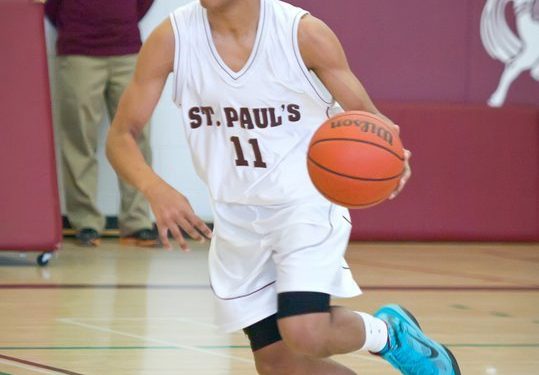 WINNIPEG, MB–Justus Alleyn seems to have big games at Kelvin High School in the month of December.  A year ago both of these teams met in a thrilling game where Kelvin HS packed the stands and made it difficult to play in their gym pulling out for a Klippers Overtime Victory.

Alleyn came up big in that game, and a year later it was the same story, just a different outcome.  This time the St. Paul’s crusaders emerged victorious 87-71.

NPH caught up with the St. Paul’s Point Guard after the game “I really like playing here, last year we had some good games here and some bad games here so it’s always fun, they always have a good crowd so it’s always a good time.”

Immediately from the tip-off there was a scrappy feel to the game, and the refs made sure to keep the game under control, calling the game extremely close.  Both teams were in the penalty for the first quarter, giving both teams a chance to earn some free ones at the charity strike.

Alleyn looked to have an assassin’s mentality in the first quarter as he managed to score 12 of his 17 points in the first frame.

“I just knew that I had to make a statement.  I wanted to be aggressive, distribute the ball well to my teammates and get the game going. I wanted to show them that this wasn’t going to be a close game.”

The 2013 6’1 PG looked to have a strong game on both sides of the floor, forcing turnovers, hitting big shots and distributed the ball extremely well to his teammates.  Alleyn made many highlights during the game, including a steal and breakaway two handed slam.

The Crusaders had managed to pull out a solid lead going into the halftime break and started to work their bench into the game. Alec Bernier (NPH Showcase Alumni) Billy Yaworsky, Josh Sleva and Malik Irwin worked well in the game adding points through a number of ways, giving the Crusaders a number of options to score.

In the fourth quarter, Kelvin Clipper Mike Doyle checked in for the first time and had an immediate impact in the game.  Doyle dropped 14 points in half of a quarter of work to make it interesting in the end.  The 2014 guard displayed a nice shooting touch and will be a threat for Kelvin down the road.

St. Paul’s head coach Jeff Laping spoke about Alleyn after the game, “Justus causes a lot of match up problems and the way the refs were calling this game suited his style of play.”

Despite being NPH #11 ranked team in the country, Coach Laping knows that there is still plenty of work to be done for the Crusaders

“I think we still need to get better at the ball movement because when we do it we get good looks, but we have a tendency to keep pounding in in the lane. Offensively we played great, but our third quarter defense was what helped us win this game”