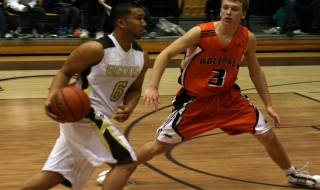 The Canada West division is arguably one of the most difficult divisions in the CIS and with the league now going to 16 teams and splitting the conference in half, getting to nationals got a lot harder.

However, the Manitoba Bisons are a team on the rise and Head Coach Kirby Schepp has been working hard to bring the best talent to the program.

This season, the Bisons lose two of their main players who were consistent starters last year. Leading scorer Kurtis Sansregret and high flying Keith Omoerah will not return. While these are two big pieces, they leave the door open for players to step up and make a solid contribution right away.

Experience mixed with youth is a solid characteristic of this team. With five seniors on the team at multiple positions, the team will lean on them to help push through the grueling Canada West season.

Leading the way for the Bisons this season will be Stephan Walton. The 5’10 point guard showed his scoring capabilities averaging 14.1 points, 4.4 rebounds and 3.75 assists per game, while shooting 43% from three point range. Walton’s veteran leadership will be relied on as he and fifth year guard Jonar Huertas will combine to make the point guard position one with depth.

While confident at the point, the Bisons front court is well stocked with size and strength. Braedon Speer, the 6’5 post player brings strength like not many do in the CIS and will use his physicality against the opposition.

Last year Yigit Ozsayiner, the freshman from Istanbul Turkey came off the bench and showed promising contributions as a role player. Kevin Oliver, the team’s leading rebounder and third leading scorer will bring leadership and a veteran presence as his ability to shoot from behind the arc will cause defensive problems. While recruiting, Schepp added last year’s MCAC MVP Wyatt Anders, 6’7 and John Taylor product Brett Jewell 6’6.

Montreal is well represented on this team, as two new comers Caleb Noel and Davidson Joseph look to make an immediate impact for U of M.

With the Canada West conference getting larger this year, the Bisons will have to battle tough against their opponents to have a chance of making it into the playoffs this season. Don’t count them out, they have  a fair amount of role players to help carry the load; the question is, will it be to heavy?

This remains to be seen.