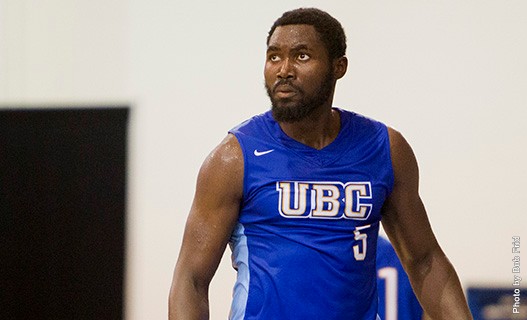 VANCOUVER, BC–The York Lions – playing their fourth game in four nights – scored the first two points of the contest, but it was all UBC from there, as seven players scored in double figures to lead the Thunderbirds to a 120-84 victory Sunday night.

With the loss, York finishes its west coast road trip with a 1-3 record.

Second year point guard Akeem Isaac was the lone bright spot for the Lions. The 6’3” Issac created scoring opportunities — for himself and his teammates — off the dribble and was able to get to the line numerous times. However, UBC took advantage of a tired York squad, pushing the tempo at every opportunity.

“We struggled defensively to contain their dribble penetration, but we did a really good job of getting out and scoring in transition,” UBC assistant coach Casey Archibald told NPH.

“We caught them at the end of a long road trip, it was their fourth game in four nights, and you can tell they were a little tired.”

For UBC it was truly a team effort: third year forward Tommy Nixon lead the way with 21 points, including 4-8 on three pointers; 6’7” forward Brylle Kamen was nearly unstoppable inside, finishing with 19 points and 14 rebounds (9 offensive); second year guard Geoff Pippus added 18 points off the bench, on 6-8 shooting and 5-6 from three; and veteran Doug Plumb had 13 points and 7 assists.

Also for the Thunderbirds, 6’0” freshman point guard Isaiah Solomon displayed a well rounded game, creating havoc defensively and running the offense with the poise of a veteran. In 23 minutes off the bench, Solomon recorded 5 points, 5 rebounds, 6 assists, 7 steals and 2 blocks.

UBC Head Coach Kevin Hanson on Solomon: “I’ve been really happy with him. He does so many things defensively; he gets steals, deflections, and he’s strong on the ball. He’s still young and he has lots to learn, but he is very very mature for a freshman. I’m very excited for how good he is going to be for us.”

Assistant Coach Casey Archibald added: “He’s been great for us defensively. He’s got great instincts, especially as a rookie. He does a lot of things you can’t teach.”

As a team UBC shot 13-30 (43%) from the three point line, including a blistering 56% (9-16) in the second half. Coach Hansen mentioned that shooting the ball, when open, has been a point of emphasis in practice.

“We didn’t shoot very many (three pointers) last year so it’s been part of our process, to play inside-out basketball.” Coach Hansen continued “We’re still giving up threes, then we penetrate and we turn it over. Guys just have to be ready; some guys have the green light but they just need to shoot it.”

Coach Archibald reiterated his position: “We felt over the last few games we’ve been giving up a lot of shots and getting turnovers. We told the guys if you’re open, shoot it. Tonight we did that, and we shot a pretty good percentage. All in all we want to shoot the ball a little bit more than we had earlier in the year, and to be fair we were open a little bit more today too.”

With the regular season looming, Coach Hansen was thankful for the opportunity to get his first year players meaningful minutes.

“Our rookies got a lot of playing time, I thought they did some pretty good things. Isaiah (Solomon), Connor (Morgan) and Jordan (Jensen-Whyte) are going to be the future for us, so we really want to try and get those guys good minutes.”