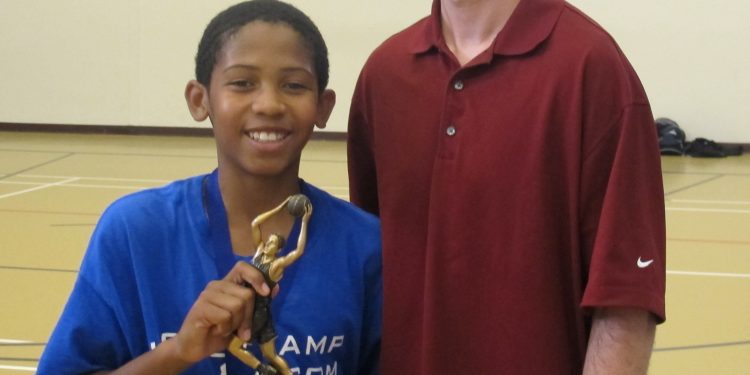 Dartmouth, NS–The 12th Annual Joes Camp ran on August 28 & 29 at the East Dartmouth Community Centre.  The camp was founded by Coach Joe Mosher to provide a high quality basketball camp for the best 11-13 year olds in Nova Scotia.  The camp is done at an affordable rate to ensure 100% of selected players can attend with the purpose of building basketball/life education through the game in addition to high level competition.

Coach Mosher definitely has an eye for identifying young talent and this year was no different.  This year’s camp showcased a group of wide eyed basketball players with very good skill level. Almost every player regardless of size showed a solid base of fundamental play.  They also showed their ability to complete tough angled finishes, mid range, long range and even tough contested jumpers.

Most impressive was the willingness to share the basketball as the teams played to move the ball and create open opportunities for each other.  The young ballers put on an awesome show and were greatly supported by coaching volunteers Jayden Nordin, Davonte Provo, Matt MacDonald, Anton Berry, and Jamie MacDonald.

As I spoke to Coach Mosher about this years camp he was ecstatic about the quality of kids participating and gushed about the positive attitudes of all participants and the very promising future of Nova Scotia basketball.  Joes Camp is a key piece to a young basketball players development in Nova Scotia as Coach Mosher brings in reputable basketball people like Ganon Baker (2010) and Coach John Campbell, Dalhousie University (annually) to talk to the participants about academics, work ethic, respect for self and the game.

This event is an excellent jump start and a “should be” on the goals list of young basketball players in Nova Scotia as it is an invite only camp.