A night for the Underdogs; Georgian Upsets Sheridan Spearheaded by Shane Rowe, while Mohawk Slays Centennial 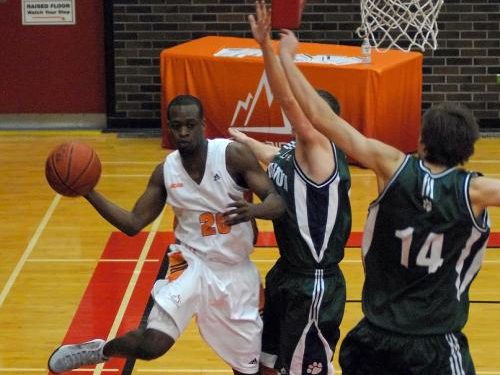 If Georgian was indeed a surprise going into the tournament, they are surely now on everyone’s radar and teams better take notice.  The Georgian Grizzlies defeated the Sheridan bruins 68-66, in an up and down game that was a treat to watch. Sheridan controlled the pace of the game for most of the first half using there pressure defense to their advantage highlighted by a 42-28 point lead at half time but Georgian came out in the second half like a team with something to prove and slowly chipped away into the lead, and was able to sustain their energy and pull the win out.

This game was a back and forth battle that saw both team’s holding big leads at some point in the game but neither team was able to hold on to that lead for long which ended up in making the game very close.

The Grizzlies would slightly pull away in the second half holding on to an eight point lead  late in the third, but Sheridan would claw back only to fall short in the end led by Klalid Abdel-Gabar who scored a team high 19 points.

Georgian was led by forward Shane Rowe who imposed his will on the offensive and defensive end leading his team to victor, registering a game-high 27 points and 18 rebounds. For Sheridan the loss is a large disappointment and will have to look to next year to regain its stride.

If the action could get any better than the first upset of the day, it did in the second contest as the Mohawk Mountaineers defeated the #1-ranked OCAA East Centennial colts in a game that was back and forth from the beginning.

Mohawk and Centennial played a closely contested affair  that saw both teams come out in the first quarter and trade baskets, yet it was only in the second quarter where Mohawk was able to make a large push using their speed to their advantage and getting fast break layups  taking a 42-27 lead into half time.

The Colts struggled for the first half with the quickness of the Mohawk guards and were unable to make shots.

The second half was a different story as Centennial came out very aggressive in a game that was very physical imposing their will in the paint, spearheaded  by 6’8 forward Theon Reefer who showed his complete arsenal making shots from everywhere on the floor.

Reefer finished with 27 points for the Colts in the loss.

Centennial would chip away at the lead which then began a back and forth affair with teams trading baskets, with Centennial tieing the game momentarily with 1:30 left the game.

However, Mohawk’s leading scorer Amino Bello hit a corner three to seal the game for his team. Bello struggled in the first half but began to heat up in the second finishing the game with 20 points.

Mohawk was able to withstand the run of Centennial and pull out the victory which was a testament to their guards Amino Bello and Manny Campbell who controlled the tempo of the game when the team looked out of sorts.

Mohawk will now face Georgian in the semifinals the game will take place at tomorrow at 6:00.

Fanshawe
The third game of the day had the three time defending OCAA champions Humber Hawks matched up with the Fanshawe Falcons.This game was a prototypical Humber-Fanshawe game from start to finish as both teams are very well coached and run their sets with efficiency.

This was a game where two teams that know each other very well had to dig down and find a way to win. The game opened up with both teams trading baskets, Humber held a four point lead at the end of the first and pushed it to six at the half.

The Hawks had a small run in the second quarter that was capped by a thunderous fast break dunk by Humber’s Mark Perrin, arguably one of the most athletic players in the country.

In the second half, Humber picked up their defensive intensity, making it hard for Fanshawe guards to get any type of penetration having to settle for perimeter jump shots.

Falcons leading scorer Boyd Vassell looked very frustrated at times with the Humber defense, as he was unable to get a quality shot for himself or his teammates. Humber grew the lead to 15 points at the end of the third quarter by a total team effort on the offensive end.

The Hawks also used great ball movement and solid decision making to grow their lead, the staples of Humber basketball, which they exemplified in this game.

In the fourth quarter, Humber maintained their lead and was poised to make a statement this game playing solid defense and never letting the Falcons breathe, showing their dominance and closing out this game with the 67-58 win.

Humber was led Akeem Sween who had 15 points and 5 rebounds for Humber and will move on to the semifinals facing the winner of the Algoma vs. Algonquin game.

The night cap of the OCAA men’s basketball championship had the host Algonquin Thunder matched up with the Algoma Thunderbirds.

The Thunderbirds would quickly regain their wits and surge ahead using the inside game of Dele Oworu to build a lead of 10 points going into the break. Algonquin’s Nehemiah Campbell who finished with 20 points, carried the majority of the offensive load for his team but ran out gas as the game quickened.

The second half would test the Thunderbirds as they were pushed to the limit with a couple of Algonquin runs but were able to maintain there composure and withstand the surges.

Algoma would never lose the lead in the second half and fought out a tough win in a hostile environment by a score of 64-57. Algoma was led by Mark Wortham in the second half who seemingly answered Algonquin’s every run with a big shot or a key play. Wortham finished the game with 17 points off the bench.

The Thunderbirds were able to take advantage of their opportunities in this game and pull out their victory while showing a lot of grit in this win which bodes well for their game tomorrow vs. Humber College.

Andy Haidar is a CCAA reporter/ analyst and is on the NPH CCAA national rankings panel. Haidar is also a former point guard in the league playing four years at Algoma University.