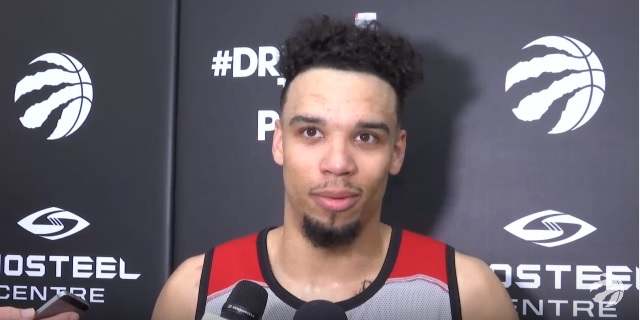 On a long weekend Monday that many Canadians have grown accustomed to laying back and relaxing before the start of a short work week, Mississauga native Dillon Brooks visited the BioSteel Centre to stake his claim to wear not just any NBA uniform, but that of his home team Toronto Raptors.

“It would mean so much, I’d get to see my family almost everyday, build this organization to be great,” Brooks said after his workout. “They’re on the right steps, and it’d just be amazing to play in front of Canada every night and, you know, just put smiles on the crowd’s faces.”

To be clear, this workout was a case of due diligence for the Raptors. Brooks found some more workouts Here. Brooks is expected to be selected in the middle of the second round, while Toronto shall only pick once in the first round.

Brooks has P.J. Tucker to thank for his local team not having a late pick this year, as the former Texas Longhorn was acquired at the trade deadline in exchange for Toronto’s 2017 and 2018 second-rounders. The Raptors currently own the 23rd pick in the draft, and while it is highly unlikely Brooks will be selected that early, there is still plenty of time between now and June 22 for Canada’s lone team to change that.

“We don’t have a second-round pick right now, but we’ve shown that we’re always able to get back in if we need to,” said Director of Player Personnel and GM of the Raptors 905, Dan Tolzman.

Having concluded his time at the University of Oregon, Brooks is currently projected to go 46th to the Philadelphia 76ers on DraftExpress.com, 48th to the Milwaukee Bucks by Chad Ford of ESPN, 45th by the Houston Rockets on NBADraft.net, and 42nd by the Utah Jazz per SECCountry.com.

The Sixers already have plenty of depth in the big guard/forward category with Ben Simmons, Dario Saric, Robert Covington, Justin Anderson, and Timothe Luwawu-Cabarrot, so opportunities would be quite limited there. The Jazz would be in a similar situation if their roster remains intact. Gordon Hayward, Joe Johnson, Rodney Hood, Joe Ingles, and Saskatoon native Trey Lyles would leave him on the outside looking in.

The Bucks? While they don’t have tremendous depth, Jason Kidd’s defensive scheme requires excellent athleticism and a large wingspan to execute their aggressive pressing style, all aspects that Brooks struggles with.

“Lateral foot speed and defending the best players that you watch everyday,” Brooks said when asked about what he needs to improve the most to play at the NBA level. LeBron (James), Kevin Durant—those guys—once you can guard those guys, you can play a long time and every team is gonna want you,”

A key limiting factor in Brooks’ ability to play the bigger positions is his wingspan. With a wingspan that matches his height of 6’6″, the challenge will be in proving himself as a defender against the elite forwards of the NBA, as a rebounder, and also as a player that can get his shot off at the next level. Despite his ability to score in a variety of ways and high basketball IQ, it’s the question marks surrounding his ability to defend at the next level that have him listed as a mid-second round prospect.

Tolzman was quick to point out that Brooks does find other ways to impact the game.

“He brings so much passion to the table and it’s like whatever he doesn’t offer skill/talent wise, he makes up for (by) making winning plays and outplaying his opponents.”

That brings us to the Rockets, who probably offer the most intrigue as a landing spot since they own both the 43rd and 45th selections and could use another ball handler on the wing.

They currently have Eric Gordon and Patrick Beverley as the only ball handlers that can defend multiple positions. Trevor Ariza is arguably their best defender but not a dependable ball handler, Lou Williams gets picked apart on the defensive end due to his lack of size and strength, and Sam Dekker has yet to earn consistent minutes. This lack of flexibility led to Mike D’Antoni using only seven men for the majority of their playoff run, and James Harden was completely worn down by the end of their series against the San Antonio Spurs.

With an increased emphasis on depth expected in the Rockets 2017-18 season, Brooks can offer them the ball handling guard/forward the NBA’s new era of position-less basketball promotes. The Oregon Duck averaged 16.1 points per game in 25.3 minutes per game this season, and did so while improving his three-point percentage from 33.8 percent on 3.7 attempts in 2015-16, to 40.1 percent on 4.1 attempts this past season.

When asked about the style of play that would best suit his game, Brooks indicated that’s exactly the type of atmosphere he could thrive in.

“Fast-paced, getting up and down, outwork the opponent at all costs,” he said. “Every team is looking for a two-way player, play both offence and defence at a high rate and I wanna be that player regardless of any negativity that comes my way. I’m ready for it.”

That skeptics Brooks referred to are already out in force. Sam Vecenie, who covers the NBA, NCAA, and NBA draft for Sporting News, recently revealed his thoughts about Brooks on a recent RealGM Radio podcast.

“I don’t think Dillon Brooks is an NBA player,” he revealed to Daniel Leroux. “We talk about who you guard on an NBA level. He’s gonna be best off guarding 4’s but he’s 6’6″ with a 6’6″ wingspan and he’s not super powerful. He’s not Jae Crowder when it comes to having short arms but strength.”

The mental aspect of competing at the NBA level is often regarded as the most difficult aspect of surviving the rigors of the highest level of basketball, but to Brooks credit, he doesn’t appear phased by it.

“It doesn’t really matter what spot you’re at,” Brooks said. “It matters about staying in the league and finding a way in your own way, your best fit. A good man told me: it’s easy to get to the league, it’s hard to stay in it—and I’ve been preaching that to myself and getting ready for the uphill battle.”

The 2017 NBA draft is about a month away, but it’s clear from Brooks’ demeanor and mindset that he intends on June 22nd being just the beginning.