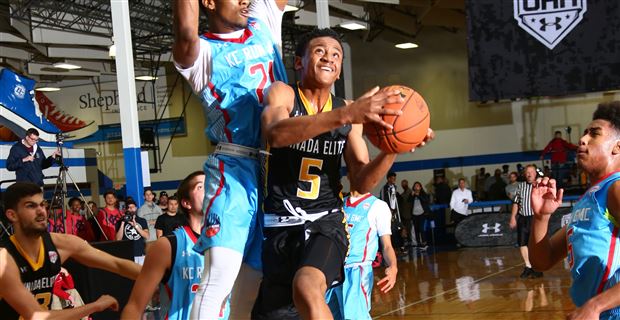 Nickeil Alexander Walker had an impressive showing at the Under Armour Elite 24 camp that went down this weekend in Brooklyn, putting together a stream of highlights over the course of the weekend.

The Virginia Tech commit finished the camp on a strong note with a 17 point, 5 rebound, 4 assist, 2 steal performance in the final game with just 14 minutes of play to work with.

Alexander Walker definitely turned some heads at this game, collecting a string of highlights during the first day of camp, and finishing a close second in the 3-pt challenge.

Check out some of Nickeil’s (#5) highlights here.

They ballin @ the #Elite24 pic.twitter.com/fjrJ7qXTra

ON POINT: Great on court rapport between @DatGuy_Trey and @TheReal_NAW1 taking turns at PG. Nice cross & pull up J! pic.twitter.com/mL4Cj679ka

Nickeil finished the first round of the 3-pt competition with authority, collecting 23 points and separating himself by seven points from the next best shooter. In the second round UNC commit Jalek Felton took over and finished with the 3-pt crown, which is truly an accomplishment when you see the way Nickeil was shooting.

Hokies fans begun to salivate when they saw the performance put on by their future guard, while to people who are familiar with just how serious Nickeil is, this is just another day at the office for the young man.

Meanwhile in the Under Armour Next Performance Game, 2020 prospect Cashius McNeilly set the tone, taking home MVP honours for his team. McNeilly had 15 points on 6-for-10 shooting in the game. The Next Performance Game was a future prospect game that featured the next wave of high school studs from across America, with McNeilly putting Canada on his back as the lone player from North of the border representing in Brooklyn.