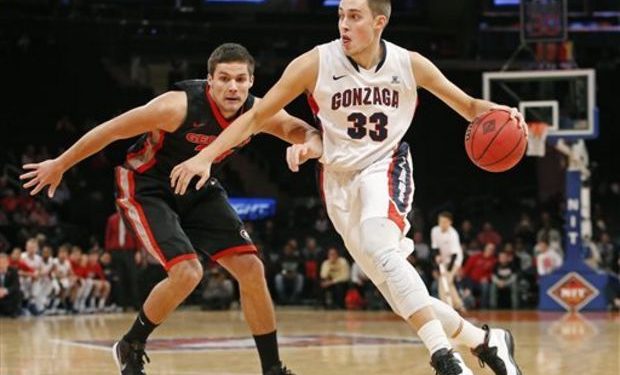 This weeks honors stay on the west coast with Kyle Wiltjer, after a phenomenal two games, earning his third consecutive men’s honor and Dillon Brooks earning men’s rookie of the week …

Men’s Player of the Week

Kyle Wiltjer is just rolling along to end the year and he looks like a top candidate for a spot on some post-season award lists. This past week he averaged 30.5 points, 9 rebounds, 2.5 assists and a steal in 36 minutes of action. He shot 19-of-32 from the field, including 9-of-14 from the range, and 15-of-17 from the line in Gonzaga’s two wins. He was named West Coast Conference Player of the Week for the third straight week and he will also be named our NC-Double-Eh Men’s Player of the Week for the third consecutive week.

Three days later against Saint Mary’s, Wiltjer went for his fourth double-double of the year going for 16 points and 12 rebounds in his 34 minutes of action. He also added an assist, 2 steals and 2 blocks. He shot 4-of-10 from the field, including 2-of-4 from the trey, and 6-of-8 from the line.

Men’s Rookie of the Week

Dillon Brooks continued to show that he was not your typical freshman in the Oregon Ducks’ last two games. In the two wins he averaged 16.5 points, 6.5 rebounds, 1.5 assists and 1.5 steals in 30.5 minutes. He shot 11-of-21 from the floor was a perfect 3-of-3 from behind the arc, and 8-of-10 from the line to earn our NC-Double-Eh Men’s Rookie of the Week.

In Oregon’s 73-60 win over Colorado February 18 Brooks had 14 points, 6 rebounds, 2 assists and 3 steals in 29 minutes. He shot 4-of-11 from the field, including making both his threes, and all four of his free throws.