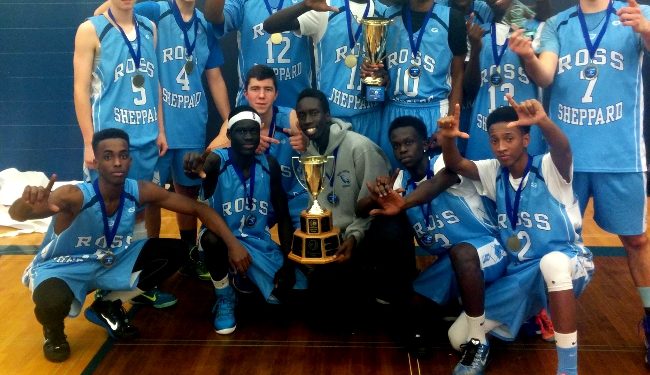 My trip to Edmonton was an enjoyable and productive experience, as I learned about the Alberta high school scene at the Mike Dea Classic–teams, prospects, coaches & the community as a whole.

My biggest take away was that the tournament champion, Ross Sheppard, can compete with Ontario’s best high school teams, in my opinion.

Well, there are a couple elements that I look for when making any evaluation of the best teams outside of Ontario. What we’re trying to find out here is, what does the best in your region really mean at the national level?

In other words, will a team back down from competition and be intimidated? If the confidence isn’t there, then you’ve lost the battle before it even started.

Ross Sheppard does not lack the toughness to compete and potentially beat some of Ontario’s best high school teams.

Secondly, Ross Sheppard has no shortage of talent and depth. Coach Dave Youngs has the luxury of digging deep into his bench for long, athletic guards with skill.

Strong guard play, wing production and an interior presence make Ross Sheppard a legitimate squad from the West that you can expect to make a mark in the #NPHTop25 National Rankings.

I also thought Shepp was very well-coached, as it seemed each player possessed a strong foundation of skill–all able to be very effective in a triple threat position, while playing high I.Q basketball.

The team generally has a sense of composure, despite playing in a hostile environment with a raucous crowd.

The only time this team was threatened in the entire Mike Dea Classic tournament was against the home team, St Francis Xavier, an energetic and scrappy bunch who took RS to overtime.

What this means is that the target will be on Ross Sheppard’s back, following an early season tournament victory. How will this group respond?

Speaking to Coach Youngs, he was generally not impressed with his team’s play, and felt that there is a lot of work left to do, a positive sign of leadership for Shepp moving forward.