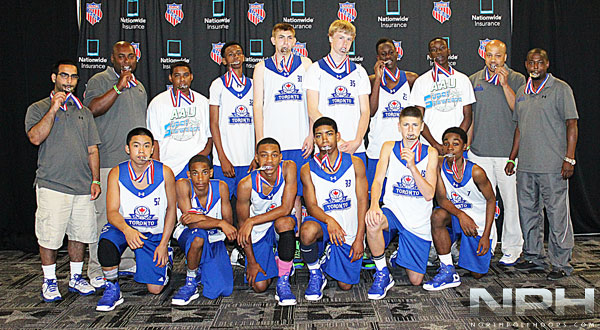 Orlando, Fla– The Triple Balance Toronto 14s came to Orlando with one goal in mind, to bring home hardware.

After a long 23 hour bus ride to Orlando, three days of competitive games, and team bonding, the youngsters from the GTA came away with the sliver medal in the sliver bracket.

Head Coach Shane James was able to get a lot out of his team although they were missing their leading scorer Jonathan Kitenge.

“We were able to move the ball very well and play unselfish basketball”, Coach James told NPH after the tournament. “ We got a lot from our leading point guard, Jordan Henry. He got everyone involved and also picked up his scoring.”

Class of 2017, point guard Jordan Henry found himself on the radar in Orlando, drawing comparisons from major division one college coaches to a young Chris Paul, and Kyrie Irving.

“Jordan is a feisty competitor. When he’s challenged he always steps up. We were without Jonathan (Kitenge) our leading scorer, so we asked Jordan to step up offensively by shooting more and attacking the basket. I think he did a phenomenal job with that.”

Henry, who did show play beyond his years, still has a long way to go before he fulfills any NBA comparisons. It will be interesting to continue to track his progress, after a successful weekend in Orlando.

Aside from Henry, many on the TB squad showed encouraging talent. Their group of 2017 players have a good chance to become very good in years to come.

“We have a very talented U14 group. We love to win, but that’s not the only focus right now. Our main focus is on developing these kids. We have a group with about five kids that are 6’5 and above, which at that age is unique. Not a lot of teams have that size. We also have some very talented guards that compliment our bigs well.”

Triple Balance Toronto showed this weekend that they have promising young talent with big upside. As a basketball fan, its intriguing to watch the growth of their program, and individual players.

With the likes of Shane James and Chris Skinner spearheading the Triple Balance organization, the players are definitely in good hands.