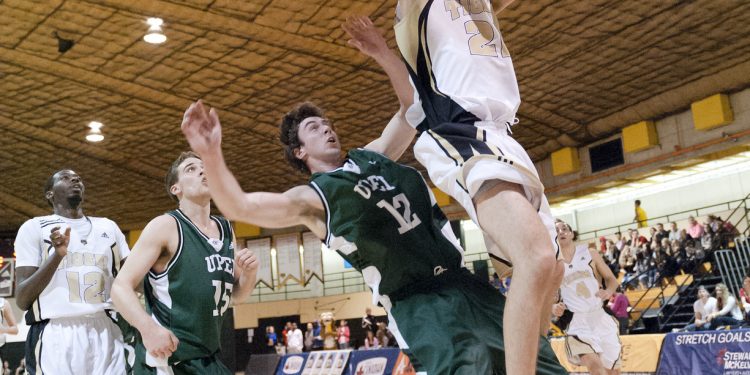 Halifax, NS–The last time these two teams met at the Dalplex, the Tigers had a large lead late in the game but the Panthers stole one away and pulled out the victory in dramatic fashion. This game would be similar but would have a different result.  The Dalhousie Tigers defeated the UPEI Panthers by a score of 81-71.

UPEI started off the game with a quick couple of three pointers from freshman stand out Mandrez Downey, who was creating space and able to attack the rim showing a nice range of skills. As result, Downey ended with 16 points at halftime.  Fellow freshman standout Deontay Smith was not contributing with as many points but was able to help the offense and still be effective.

However, Dalhousie would fight back. Simon Marr took advantage of the height mismatch down low and went to work for the Tigers. Marr the interior, leading to 20 points and seven rebounds at halftime.

Heading into the halftime break, Dalhousie led UPEI 46-35 due to Marr’s performance. UPEI was still hanging around due to Downey and Geoff Doane’s offense combining for 26 of their 35 points.

Early in the third quarter the Panthers hopes of coming back took a blow, Downey went down on what seemed to be nothing.  Downey was helped off the court by Coach Kendrick and teammate.  He received treatment; getting his foot taped and had his foot up on the bench for the rest of the game.

William Yengue one of the captains of Dalhousie carried the load as UPEI was able to scheme better against Marr down low. Yengue made a few nice midrange open shots in the third quarter to help his team hold off against the surging UPEI attack.

“I was hesitant taking the open shots, but my coach told me to take the open shots because I make them all the time in practice and last year so there is no reason why they won’t go in. I was taking what the defense was giving me” said Yengue after the game.

Like they did in the last game, UPEI continued to fight with another freshman making an impact. First year guard Lorenzo Parker (NPH Showcase Alumni) made two difficult and clutch three pointers late in the game cutting the large lead to three with plenty of time left to play. Joe Kendrick was also key in the comeback, Kendrick went to the line multiple times going 11/12.

Dalhousie would hold on and emerge victorious. UPEI wins the season series between the Tigers going 3-1.

Head Coach John Campbell spoke about the victory. “The two points help, we need to prove we can beat playoff teams and try to play a bit better each night.”

Campbell and the Tigers will get their shot at a playoff team, as Dalhousie takes on the undefeated Cape Breton Capers (13-0) tonight at Dalplex to try and extend their wining streak to four.