St. FX punches their ticket to the CIS Final 8 with a victory over Cape Breton 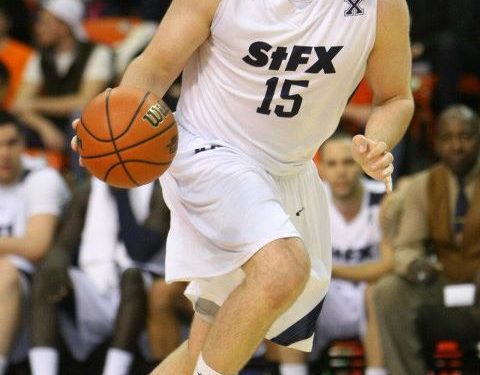 Halifax, NS–On Semi-Final Saturday a legendary AUS matchup took place with the winner advancing to the AUS Championship and at the same time booking a spot in the CIS Championships.

Having played each-other already four times this season and with the St. FX X-Men getting the better of the Cape Breton Capers in all of those four meetings, the X-Men continued that trend with a 92-77 victory.

The X-Men came into the AUS Championships as the number one ranked team in the conference.  Jeremy Dunn certainly had a will to win as he was dominant from the tip-off.

Following the first quarter, the second frame of play was more favoured to the X-Men as they started to build a comfortable lead that they would not give up, leading by 12 at halftime.  Going into the halftime break Dunn was getting more than comfortable, and had already put up 17 points and 6 rebounds in the first half alone.

The Capers wouldn’t  give up that easily and slowly started to claw their way back into the game.  Led by AUS MVP Jimmy Dorsey, Al Alilovic and other role players they had brought the X-Men lead down to within six points going into the final frame.

At this point Terry Thomas and Marquis Clayton took over the game.  They were giving everything Cape Breton could handle.  Clayton hit a deep three pointer and was consistent from the line in the final minutes of the game which allowed St. FX to hold onto the victory.

Dunn earned player of the game for St. FX with 32 points and 10 rebounds.  Dunn was in the zone and was knocking down three pointers, driving hard to the basket and grabbing rebounds.

NPH spoke to Jeremy Dunn after the game about the game and how it felt to get the victory. “We had great ball movement on offense and the shots we had were wide open and we knocked them down.  It’s been like that all season, it wasn’t just one guy, we came out dominated and had big contributors off the bench as well as the guys who started the game.”