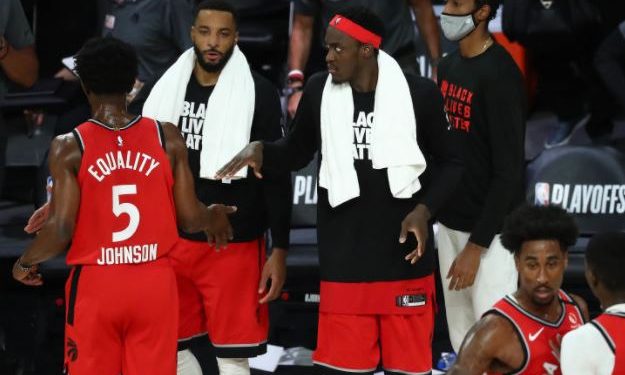 The Nets had their best shot to beat Toronto in Game 2, but they came up short in the dying minutes. Toronto went on to rip out Brooklyn’s heart in Game 3, stomping out hope, optimism and confidence in the process. It is safe to say the outcome of this series had long been decided, the only remaining question was; do the Nets have enough to push the series to a Game 5? With dwindling bodies, fading confidence and a red-hot Raptors squad, Brooklyn looked ready to throw in the towel.

The Nets decided that if they were going to go out, they would go out swinging. They were aggressive from the tip, forcing the Raptors to play a quickened pace. Toronto responded in kind but were slowed when Lowry picked up an ankle injury before the end of the 1st. It was a tight contest until Powell and Ibaka subbed in to help establish separation. They carried their strong play throughout the game, giving Toronto’s high usage backcourt a welcomed night of light duty. The second half was all Raptors, they buried the Nets in an avalanche of jumpers. Toronto never let up, they maintained their championship mentality, even when up 20 points, they played as if it was Game 7. Respect to the Nets for competing hard but the Raptors were scorching, by the third quarter, it was a blowout. 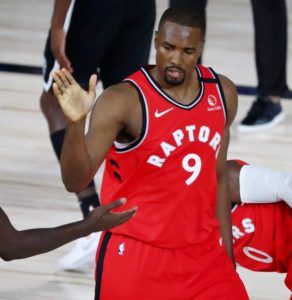 Toronto’s emotional leader, Sege Ibaka, was unguardable in the paint. He had a quick trigger finger and cashed in at a high percentage. He earned his paycheck by connecting on short range floaters on one end and swatting away weak layups on the other. Ibaka stretched his game to behind the arc which opened another wrinkle to his offense. Serge was a titan on the glass, securing a double double in only 20 minutes. Ma Fuzzy Chef closed out the series in style with a shooting clinic from the 5 spot. 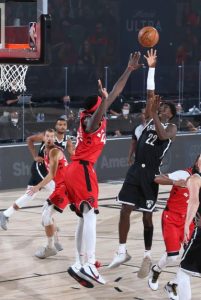 Caris LeVert did his best James Harden impression by scoring at will in a frenzy of desperate basketball. He did all he could to carry the Nets throughout the night (and the series) with diverse scoring and playmaking abilities. He swiveled his way through Toronto’s defense like water through a sieve and he showed excellent elevation and balance on his jumpers. Caris is an exceptional talent, he can help any roster he plays for but against the Raptors, he was a man in the ocean trying to hold back the tide. 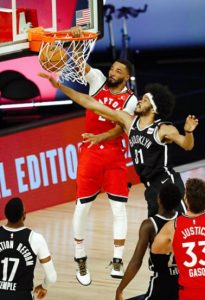 Norm Powell has quietly emerged over these last few games as a reliable tertiary option. Powell is the perfect teammate to have when going on a run because he excels at building momentum. Norm subbed in late in the first, splashed a couple of triples and picked up a steal in the open floor to help Toronto gain control. He is one of the best at recognizing his opportunities, he attacked efficiently with a mixed bag of tricks and showed no fear on his drives. Game highlights included a couple of corner threes and a handful of silky layups and nasty dunks. Powell scored a team high 29 off the bench. The real Playoff P plays for the North. 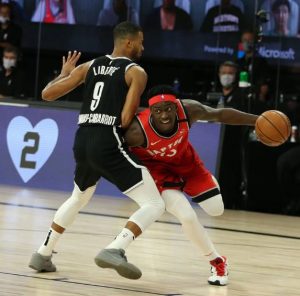 Pascal Siakam had another star making performance, emerging as an important piece to Toronto’s offensive approach. His ability to find his teammates as well as get off any shot he wanted made him a dangerous weapon and a key factor in Toronto’s series dominance. He had to pick up the slack for an injured Lowry, but that was no problem for New Mexico’s finest. He finished his night with a quiet 20 and 10.  Spicy P is starting to heat up, the Raptors are going to need him at his best against Boston’s talented wings.

The competition for the Toronto Raptors will be significantly greater when they face the Boston Celtics in Round 2. The Celtics are talented, deep and incredibly well coached. They are a tough nosed team that plays hard on both sides of the ball. Toronto has the edge in size and experience, but the Celtics will be ready to give Coach Nurse and the Raptors all they can handle. Make no mistake, Round 2 will be a war.

Bubble Raps – The Raptors begin Round ...