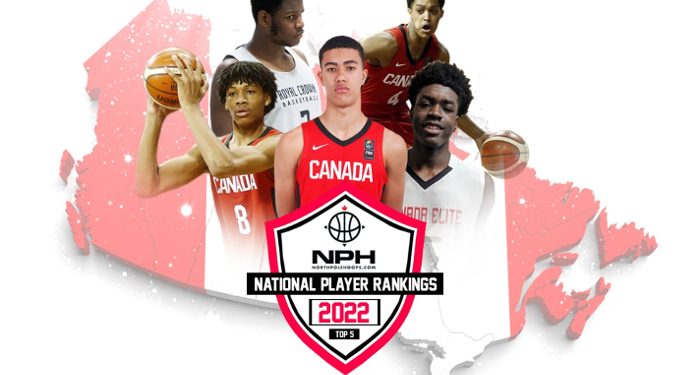 With all the concern this summer about Canada’s top players not representing their country at the men’s level, the Canadian Class of 2022 gives us reason to believe that this won’t be the case going forward.

The 2019 FIBA U16 Americas Championships took place this summer and Canada had a great turnout with the five top-ranked players in the 2022 class putting on their red and white jerseys to represent the country. Not only were they rewarded with a silver medal for their efforts, but the opportunity to play on an international stage against high-level competition should accelerate their development as well.

Here’s a look at the Top 5 of the North Pole Hoops Canadian 2022 Class:

Caleb Houstan cemented his position as the #1 ranked Canadian in the class after he dominated the FIBA U16 Americas. Houstan was far and away the number one option and answered the call with by scoring 22.8 points per game on efficient shooting (50.8% on 2s, 32.4% on 3s) – the second highest scoring average tournament-wide. He’s got a great blend of size and skill at the wing, with clean shooting mechanics and an ability to create his own shot at all three levels. He plays with a great sense of poise and it feels like he always makes the right play when he has the ball. Now in his second season with Montverde Academy, Houstan should continue putting NCAA and NBA scouts on notice.

Enoch Boakye’s physicals stand out the second he enters a gym. The 6’10” power forward has a strong frame, long wingspan and stellar athleticism. Combine that with the mean-streak Boakye plays with and you have the most dominant big man in the 2022 class. Defensively, Boakye is a stellar rim protector who will win out and grab almost every contested rebound. He averaged 10.8 rebounds at the FIBA 16 Americas, 3rd amongst all competitors. On the offensive end Boakye is most dangerous as a dive man off the pick and roll or lurking on the baseline near the dunker’s spot. If he’s within 5 feet of the rim chances are he’s going to try and throw it down.

After spending last season playing his school ball in the States, Boakye is back on home soil representing George Harris Prep this year. As he continues to diversify his offensive game, Boakye should only become a more dominant force going forward.

Shaedon Sharpe might be the most athletic Canadian in his class with his combination of breakaway speed and out-of-the-gym leaping ability. Standing at 6’3″, Sharpe has the ups to throw it down on just about anybody. He plays a very efficient game on the offensive end with most of his attempts near the rim or uncontested 3s. At that same FIBA U16 Americas Championship, Sharpe led the tournament in field-goal percentage knocking down a stellar 68.0% of his shots. As his outside shot continues to improve the offence should only come easier for Sharpe from here. His physicals resemble those of none other than Kawhi Leanord.

Jayden Webley is a big body who knows how to use it when he has the advantage. He runs hard in transition, establishes inside position early and seals his man under the rim for easy finishes. He’s a great rebounder who can overpower opponents to get where he wants. He spent last season with Montverde Academy where he worked on his body, footwork and overall skill level around the rim. Now representing Royal Crown Academy in the National Preparatory Association, Webley is starting to put everything together on the offensive end.

It seems like every class has a Canadian point guard who plays beyond his years and with Ryan Nembhard jumping up to 2021, Jaden Clayton is undeniably that guy for the 2022 group. On top of representing Canada in the FIBA U16s, Clayton played two years up with UPlay Canada on the Nike EYBL circuit. He has a tight handle and he’s a cerebral passer who is improving his ability to create for himself on the offensive end. Clayton is back at ISA this season and is the only sophomore in their starting lineup – once again getting a chance to hone his skills as the youngest guy on the court.