Luguentz Dort Steals the Show at Biosteel All Canadian Game 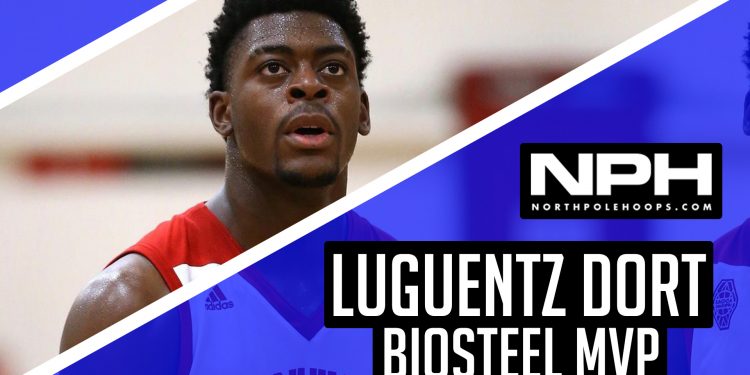 TORONTO, ON–It’s only fitting that the number one player in this year’s Canadian graduating class, Nickeil Alexander-Walker got the 3rd annual Biosteel All Canadian game started with hot three point shooting and acrobatic reverse lay ins. That was until Luguentz Dort of Quebec stole the show with 30pts on 75% shooting.

After a few days of practices in front of NBA scouts, this year’s All-Canadians were set to play in front of a sold out crowd at UofT’s Gold Ring Centre.

Alexander-Walker’s White Team got off to a 25-10 start six minutes into the first quarter. From that point on there was chirping going on between N. A. W and the Red team’s Abu Kigab, who is committed to Oregon for next season.

These two alpha males set the tone before the highly recruited, highly effecient, 2018 grad Jaelin Llewellyn checked in. Llewellyn had a team high 12 points at the half on 5-7 from the field and two assists in 12 minutes.

The stars shined at different times. Different prospects took over in each quarter, yet the name that kept popping up was Quebec’s Luguentz Dort. For many Canadian basketball fans, it was a first time seeing Dort in action.

He quickly became a fan favourite, providing emphatic dunks and connecting from deep. It was an MVP performance where Dort dropped 30 points, 3 assists and 2 rebounds and he did this on 75% shooting on the night.

Dort has a lengthy list of big time NCAA programs on his trail including the likes of Oregon, Louisville, Florida, Baylor, Missouri and the list goes on.

Considering he is a 2018 grad, he will be using another year to hone point guard skills to an already well established skill set.