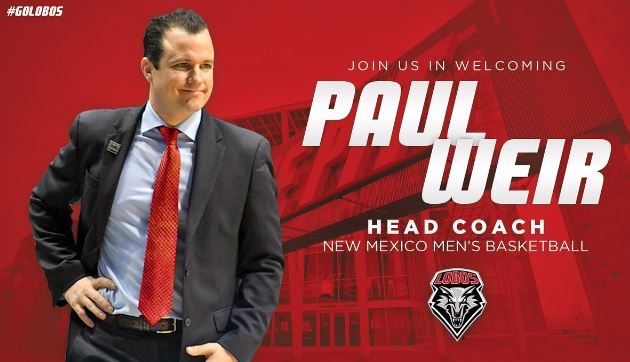 Announced today, Toronto’s Paul Weir inked a contract with the University of New Mexico for a 6 year deal after a long stint with rival university New Mexico State.

Paul Weir has had great success in the recruiting of Canadian talent to New Mexico State. Player like Daniel Mullings, Matthew Taylor, the Bhullar brothers (Sim and Tanveer), Rashawn Browne as well as a host of others still on the Aggie’s roster.

Canadians will continue to make their way to New Mexico but now it’ll be three hours North of El Paso.

The 2016-2017 season was Weir’s only year as Head Coach and he got the job done with an appearance in the tournament and a record of 28-6, while winning the WAC tournament championship.

Weir will attempt to take a middle of the pack Lobos squad from a 10-8 season to a conference title.

Keshaun Saunders is currently the only Canadian on New Mexico’s radar for 2018. You can put a bet that the Canadian pipeline for the Lobos is about to ramp up.