Team Canada knocked out of Rio by France 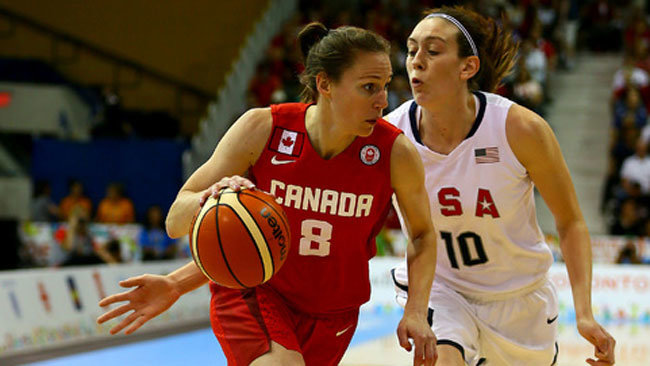 Team Canada’s SWNT lost a heartbreaker in their quarterfinal matchup against France, falling 68-63 to eliminate them from competition at Rio.

Canada was led by veteran and captain Kim Gaucher with 15 points and five rebounds, and the Red and White led by as many as 13 in the first half before letting their lead slip to five at the break.

The second half remained close, with the teams trading leads in the third quarter only to finish the third tied at 50. Canada played well defensively, forcing numerous shot clock violations by the French, but struggled on the other end of the court, failing to connect on crucial shot opportunities and keeping France in the game.

The fourth quarter saw much of the same intensity, but France was able to finish on a 8-4 run to preserve their lead.

“It’s terribly disappointing,” head coach Lisa Thomaidis told the Canadian Press. “With every piece of me I believed we were going to be winning tonight and I think every single player that was on that floor wearing a red jersey believed that we were going to win.”

The Canadians had been successful against the #4 ranked France at the USA Exhibition Showcase that took place right before Rio, but the women were unable to find that success against the higher ranked opponent again when it mattered.

After a historically strong start at the Olympics for the Canadians, winning their first three games including an 18 point comeback against Serbia, the Red and White suffered a string of losses to international powerhouses America, Spain and France.

France was led by Sandrine Gruda who added a double-double in the win with 14 points and 10 rebounds. The French advance to the semifinals where they match up against the United States, after the Americans silenced a firey Japan 110-64.

Thinking of @CanBball players + coaches this am. U definitely raised profile+gave many desire 2 play. Olympics r tough! Ur country is proud

Despite the loss, the Canadians display at the Olympics marks the start of a new era of basketball excellence, introducing Kia Nurse, Nirra Fields and Natalie Achonwa as the core in the next generation of Canadian stars.

So much respect must go out to the veterans of this Women’s team who have led this country’s basketball program through thick and thin over their careers, with Rio possibly marking the end of their national careers for some of those players.

Always tough to lose, regardless super proud of our women's team! @CanBball

Canadians like Shona Thorburn, Lizanne Murphy, and Kim Gaucher were representing this country and playing basketball at an elite level before the game was even on the radar in the Canadian sports landscape, and were idols to any girls growing up with hoop dreams during that time.

They fought until the end. Very proud of this @CanBball Olympic team, esp the vets who played their last game pic.twitter.com/VDAI8rJ4V5

These women were part of the movement that put basketball on the map for Canadians, and helped paved the way to success that future Canadians will enjoy as the program steadily improves.

This marks the second straight Olympic appearance for the Canadian women, after failing to make the cut in 2004 and 2008.

“If nothing else I think we’ve proven we can play with the big girls now,” said Thomaidis. “I thought we were ready to take that next step and knock off a big team when it was critical and to get ourselves into a semifinal.”