What Happened at OFSAA Day 1? 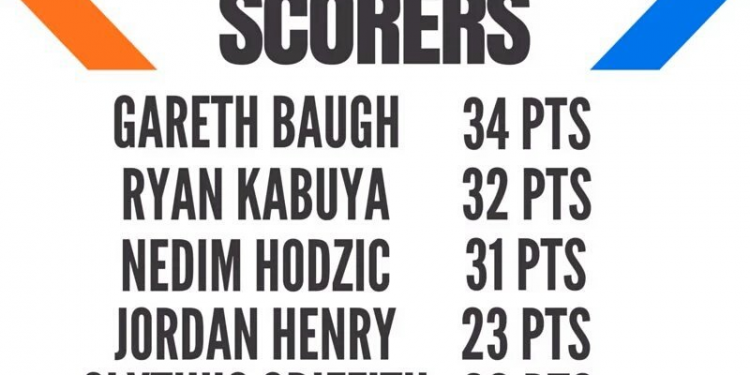 WINDSOR,ON–With the number one seed in the tournament, Father Henry Carr, on their toes against St. Joseph’s (Mississauga), it made for entertaining first round action.

Fans in the building at the host facility weren’t sure where St. Joe’s was from but had eventually took the side of the underdog. The other anticipated first round game was that between #7-seed  Sir John A. Macdonald (Waterloo) and #13-seed MacNab (Hamilton).

St. Joseph’s Jaguars wing, Gareth Baugh almost willed his team in the direction of upsetting FHC in their first game with a 34-point performance, making him OFSAA’s leading scorer after day 1.

As a pack, the Jaguars won the battle on the glass, specifically on the offensive end, where they were able to recover and get second and sometimes third chances at a bucket.

The game went down to the final minute where FHC would walk away with a 68-64 win.

The bright spot for the top seeded FHC Crusaders were Tristan Sadler who came off the bench for a team-high 19 points and Mychal Paulo, who had a hand in every play whether picking a pocket, following a shot for a tip in, or hitting the open three.

There was a series of plays where Paulo was either the assist man or scorer. He doesn’t need the ball in his hands to be effective, overall he’s a low maintenance player.

By 4:00 pm today, the quarter final match-ups will be set. Of course it can go either way and of course this is the environment that is subject to upsets, however if all goes as should based on what the season has taught us; expect to see Bishop Reding vs Oakwood and Vaughan vs SJAM (must see).

On the other side of the bracket it’s a little trickier. The opponents match up well together in terms of player personnel–a FHC vs West Humber match up will be a territorial game to represent Rexdale.

Below them in the other quarters there is stingier competition. It’s tough to make picks between Sir Allan MacNab and St. Michael’s College.

MacNab has a sour taste in their mouth from yesterday’s loss to SJAM and SMC has been up and down all season. There’s a strong possibility that Danilo Djuricic, Jahmal Abbey-Wright and Koby Lam carry SMC in this one.

For the 4:00 pm quarters, Pine Ridge and host team Catholic Central will battle it out to move on in the tournament. There is really no telling what will happen here. One thing that’s for sure is that Pine Ridge will be needing to knock down their three because any traffic in the lane will be blocked by 6’9 Jonathan Nicola of CCH.