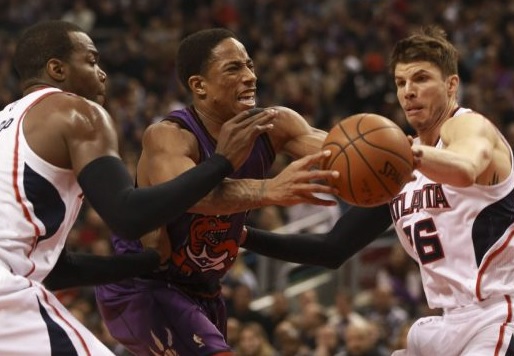 Toronto, ON- They were faster, they shared the ball better, they were more efficient offensively, and on Friday night, the Atlanta Hawks (32-8) proved they are the class of the Eastern Conference, picking apart the Toronto Raptors (26-13) to the tune of a 110-89 score.

The fans at the Air Canada Centre were treated to a game featuring two teams trending in opposite directions. The Hawks have now won 11 in a row and 26 of their last 29 games. The Raptors, on the other hand, have lost 5 of their last seven, and are barely holding on to third in the Eastern Conference.

“We have a winning group, so the frustration level is there,” said Kyle Lowry, “But we’re not pointing fingers, we’re just trying to figure out how to get back to winning ways.”

The Raptors are undoubtedly struggling, and are currently playing their worst basketball of the season. In Friday night’s loss, the Raptors turned the ball over 17 times, a worrying trend, considering they also made 17 turnovers Monday against the lowly Philadelphia 76’ers.

“I think its just teams putting more pressure on us,” said Demar Derozan about the turnover problem. “We have to realize that and get back to what we were doing at the beginning of the season, cherishing the ball whenever we had it,” he said.

The combination of Jeff Teague (13 points, nine assists) and Dennis Schroeder (nine points, four assists) burned the Raptors’ frontcourt with their speed, while they’re dizzying display of passes allowed for open shots all over the court. Atlanta scored their 110 points on an incredible 61% shooting, aided by 30 assists. Al Horford was dominant inside, going a perfect 8-8 from the field to score his team leading 22 points. But there wasn’t one dominant player for the Hawks. Their ability to share the basketball led to six players scoring in double digits.

The game simply wasn’t close. The Raptors’ only lead was at the 8:11 mark in the first quarter. The score was 9-8. The Hawks turned it on after that and never looked back.

“That game was not us,” said Raptors head coach Dwane Casey following the game. “We didn’t come out and put our best game on the court. We’re still in a rut,” he said.

An over-reliance on jumpshots, especially from beyond the arc, plagued the Raptors on Friday night. They shot a poor 42.7% from the field, and a horrid 6-25 (24%) from deep. Terrence Ross’ shooting woes continued, going 1-8FG and 1-4 3PT. Patrick Patterson, who was lights out in December, missed all three shots he took. Lou Williams went 2-6FG, 1-3 3PT and Greivis Vasquez rounded out an awful shooting night going 3-7 from the field. Even Kyle Lowry, the engine of this team struggled to score his 11 points on 5-13FG and 0-6 3-PT.

The play of Demar Derozan and James Johnson was the lone bright spot for the Raptors on Friday night. Derozan, in only his second game back from injury, was both productive and efficient. He scored 25 points on 11-18 shooting.

Meanwhile, James Johnson continued to make his case to join the starting rotation, putting up 17 points and six rebounds on 7-11FG. Derozan and Johnson were the only members of the team to put an emphasis on attacking the rim while everyone else around them settled for jumpers.

The Raptors conclude their six-game homestand on Sunday when the New Orleans Pelicans come to town. The Raps are currently 2-3 during this stretch, and are 2-5 in the month of January.

Kyle Lowry received the “Player of the Month” award for the month of December before Friday night’s game. In December, Lowry scored 22.3 PPG on 46% shooting. He added 8.9 APG and even chipped in 4.2 RPG as well.

Much has been made about the possibility of James Johnson getting a chance to start instead of the slumping Terrence Ross. As Ross struggled again on Friday night, coach Dwane Casey limited him to just over 26 minutes, while giving Johnson 26:35. For a stretch in the third quarter, coach Casey experimented with a lineup of—Kyle Lowry, Demar Derozan, James Johnson, Amir Johnson and Jonas Valanciunas.