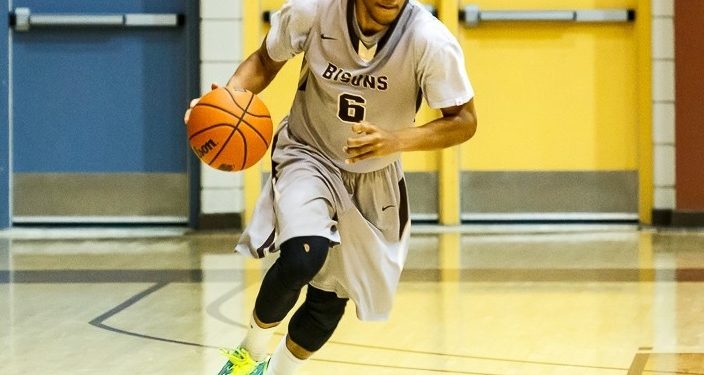 With the majority of Canada West basketball teams finishing up their games this past weekend before the holiday break and the proverbial mid-way point of the season, this week is a special edition for five takeaways.

The below rankings are, in descending order from 5-1, the teams I believe are in the best position to win the Canada West and be the number one seed at nationals from Manitoba to BC.

The Bears have lost three games in a row after starting 4-1 and have one game remaining on their schedule before their break. This ranking is purely based on their merit of the past and the fact that they have one of the best Coaches in the CIS – Barnaby Craddock – and one of the best players – Joel Friesen.

They can only afford to lose three or four more games if they want to be a contender come February. Outside of games against Manitoba and Calgary their remaining schedule is extremely favourable which is another reason why I am picking them as a contender. If they happen to split games with both Manitoba and Calgary then they will be right back in the conversation which is why I am not yet ready to pull the emergency cord – like I have for UBC.

Alberta played at Nationals last year and even if they do get a bad seed in the playoffs have the ability to make a run for the title. These Golden Bears have a lot of talent and obviously haven’t clicked yet on their pursuit to another birth at Nationals.

The Cascades will win the Explorers division and will most likely run the table in doing so finishing 20-0. The only reason they are last on this list is because of their lack of competition during the regular season that could potentially harm them come playoff time.

They’re just as talented as the other teams on the list and in some scenarios even more talented but the truth is that their toughest competition is going to be the Thompson Rivers University WolfPack who they dominated just two weekends ago.

The Cascades boast one of the best front lines in the Canada West–Jasper Moedt, Nate Brown, and Kadeem Willis constantly rotate in and out of the starting lineups based on the wishes of Coach Friesen. Moedt is a former all-Canadian in the conference, Brown is the best unknown player in the Canada West, and Willis made national news after scoring forty points on a perfect 17/17 shooting day back in October.

Friesen doesn’t actually have a lot to do to make this team a contender except make sure that they are ready come playoff time and they could just overpower the teams from the Pioneers Division.

The Huskies are a team that is part of this historically good section of the Pioneers division alongside Victoria, UBC, and Alberta but have failed to really standout this season. They are the highest ranked team in the Canada West but I tend to disagree after getting swept by the Thunderbirds to end 2014.

Outside of the top two on this list, the majority of the Canada West have failed to gain a lot of traction this season, and the Huskies are no different. USask has beaten good teams and lost to the bad.

The Huskies have something that will prove invaluable come playoff time if they can hold a top seven position in the division by the end of the season – they are currently tied for seventh with the Golden Bears – they have experience as this team was the Bronze medal winner a season ago after defeating the Cascades. This playoff experience will come in handy if they even make the playoffs but the Huskies need to be more impressive in 2015 in order to ensure their position.

I believe in the Huskies but not enough to give them a higher spot than four.

If the Golden Bears need to rely on their star player and head coach for the rest of the season, the same is true for the Vikes who need depend on Chris McLaughlin to dominate for the rest of his final Canada West season. Reigning Coach of the Year last season Craig Beaucamp has his team back on track after losses to the University of Saskatchewan, dominating the University of Alberta. The Vikes won’t play again until the January 9th.

The Vikes are talented, perhaps even one of the most talented in the conference but, have lost to teams this year that they are better than and need to end this trend before it gets to be what ultimately does them in.

They sit comfortably with a 6-2 record at this point in the season, good for third in the division. With the top seven teams making the playoffs in the Pioneers division, we can expect that the Vikes will stamp their spot by the time it is all said in done. However, they do have one of the scariest looking schedules left playing Manitoba and Calgary in their first two weekends of 2015.

The team from one of the coldest provinces does indeed have ice in their veins. The Dinos hold an 8-2 record and a tie for first place in the division with the U of M Bisons. This team is extremely talented and could potentially at this rate carry the Canada West into Nationals come March.

There are a number of reason however, that I don’t believe they are ready to be number one team in the Canada West.

Just this past weekend they battled the last place Trinity Western University Spartans and needed double overtime to defeat them. Every team has bad nights and I hope, for the fan’s sake, that this was just a bad night for the Dinos. The next night they did perform a tad better and were able to defeat the Spartans in regulation by twenty.

My biggest beef with the Dinos is the fact that they rely offensively on starting guard Jarred Ogungbemi-Jackson for the majority of their scoring. His 18.9 PPG is approximately 25% of Calgary’s overall offense, not to mention his 8.4 rebounds and 4.7 assists per contest. That being said, UC cannot afford an off night from O-J, who has proven time and time again, to be one of the top point guards (and players) in the nation.

I do believe that the Dinos will be a playoff team that much is certain. The conversation though begins when comparing the Dinos – a relative newcomer – to the powerhouse teams in the division.

Who knew the province of Manitoba had such good basketball? Team Manitoba captured their first ever National championship this past summer at the high school level, & it looks like winning is becoming contagious within the province. The Bisons, alongside the aforementioned Dinos, are the number one option (at this point) for Canada West fans to win the conference and represent in Toronto for Nationals. They sit tied for first place with the Dinos and dueled with each other 12 days ago where they split games.

The Bisons are my number one pick because they are the better defensive team in my eyes. Their ability to score a lot of points very quickly is also a plus in providing them the number one rank.

One of the reasons I love this team so much is the fact that they play great fundamental basketball night in and night out. They don’t rely on one player like the Dinos for the majority of their scoring and instead dominate with their entire starting lineup. The Bisons are a relatively unknown powerhouse and could potentially see a dip in their production coming up as they play some better competition.

The biggest challenge for Coach Kirby Schepp is managing his troops, to deal with their newfound national presence and keep their heads out of the clouds. If the team can remain grounded, why not Manitoba?