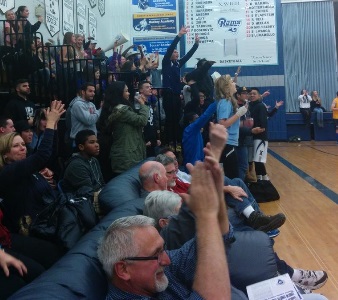 The home team St Francis Xavier Rams faced off against a hungry Ross Sheppard team, who I thought were the tournament faviourites entering day two.

The result ended in an overtime classic in favour of Shepp 73-79.

Props goes to Coach Jeremy Posteraro & the Rams who impressed with their defensive engagement ALL GAME, and used their speed against a much bigger, longer, more athletic Ross Sheppard team.

St FX gave Shepp everything they could handle. After being down by about eights points all game, FX finally broke out at the end of the third quarter with Liam Harrison heating up from deep.

The gym was electric as fans from both sides showed their support.

It was a boxing match, with each team responding to each other’s shots, and likewise the fans volume increasing by the minute.

“I think the FX crowd got into our heads but we pulled it through,” explained Machot Magok, who turned it up for Shepp in the second half.

“We had nice support too, and they helped us pull out the win,” Magok told North Pole Hoops.

FX had a chance to win it at the buzzer, but Clifford Bangura came up with the big block to send Shep faithful into a frenzy.

Daniel Fleming and Yasser Abdullahi would help seal the deal in extra time, hitting shots in the mid-range.

Ross Sheppard now matches up against Archbishop O’Leary who were able to handle St Francis in the other semi-final.

Shepp will now be matched with size, however the depth will still be in Shepp’s favour.

From an evaluation standpoint, this game will provide insight into the cream of the crop.

Who will step up in the big moment?

“They have size but we have speed so I guess it will be a pretty even match up…we’ll see.”