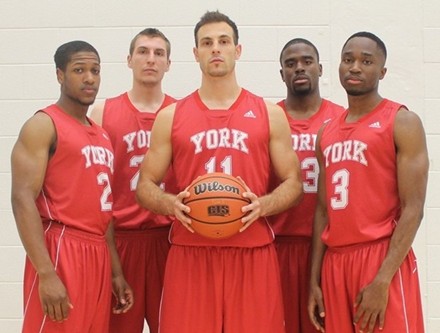 The York Lions are hungry.

After two straight years of injury for emerging star Daniel Tulloch, the rising third-year talent is ready to make the most of the 2014-2015 season.

“I’m very hungry, I’m more determined than I’ve ever been to win in my entire career of basketball. I have a lot to prove,” Tulloch told North Pole Hoops.

The 6’5 explosive wing suffered a torn ligament (thumb) in his freshman year, followed by multiple concussions as a sophomore–playing only 11 games each season.

The Mississauga, Ontario product was named to the OUA All-Rookie team after averaging 11.3 points, 5.9 rebounds and leading the team in field goal percentage, at 57%. Last season, Tulloch averaged 18.7 PPG before going down, good for 8th in the OUA conference.

Tulloch said that he appreciated the all-rookie nod, but he didn’t feel he deserved it due to not playing a full season.

“I need to prove that I can help my team compete for a championship,” said Tulloch.

York Lions Head Coach Tom Oliveri, like Tulloch, is confident and motivated to do the same.

In terms of York’s goals, “we want to contend for first place in our division. We think this group has the potential to do that. We want to push the envelope,” explained Oliveri.

Following multiple losing seasons for the Lions, the 2014-2015 campaign will be a true test for the program.

However, York looks well equipped to meet their own expectations.

Not to mention, the Lions will activate 6’8 combo forward Kherel Silcott, a NJIT transfer (NCAA) from last year.

“We look strong, we have a lot of talent so we should be surprising some people,” said Tulloch.

In terms of style, you could expect the Lions to run the break and finish above the rim.

“We’re athletic and we’re going to get up and down…it’s going to be an exciting brand of basketball,” said Oliveri, while also speaking to their versatility on both ends.

Tulloch described Tufegdzich as “really solid and polished, specializes in the post…he has established himself as a threat in the league.”

“Ryan (Ejim), I like to describe him as an animal…very agressive and he will give you 110% every time on the floor.” — Very much like older brother Melvin Ejim (Iowa State) 2014 BIG 12 player of the year.

Nathan Culbreath, entering his sophomore year will look to improve on a very solid freshman season that saw him average 7.3 PPG and 2.6 RPG

The freshman crop of Gene Spagnolou, O’Neil Halstead and Tristan Newman are also expected to contribute off the bat.

Oliveri addressed the rookie transition, “they will have growing pains in the fall…but come January, you’re no longer a freshman. We expect them to get acclamated physcially.”

“These guys have high expectations for themselves….they believe they can play with anyone,” continued Oliveri.

As the OUA regular season tips off on November 8th at Lakehead, the Lions will have to prove it.

“We look forward to the challenge.”