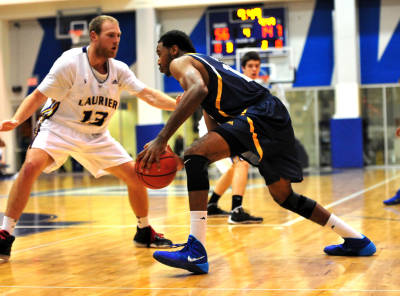 TORONTO—In two games on their home Coca-Cola Court at the Mattamy Athletic Centre, the Ryerson Rams have yet to trail.

Just like the previous night against the Waterloo Warriors, the Rams beat the Wilfrid Laurier Golden Hawks by the score of 84-70 in a contest where they lead throughout. “That’s a good Laurier team. They have a great player in Max Allin. Will Coulthard is one of the better guards in the league,” Ryerson head coach Roy Rana said. “And Peter Campbell is an institution in the CIS.”

Rams point guard Jahmal Jones is the first to remind everyone that it’s not all perfect. “We know we can be a lot better and we haven’t been up to our potential,” he said. “We have to improve in every facet. It’s early, and we don’t want to peak too early.”

The game between Ryerson and Laurier was a lesson in keeping an opponent at bay, or a lesson in perseverance and in never giving up, depending on your allegiances. Let’s split down the middle, then, and call it a damn exciting game.

The Rams used their advantage in size to gain a 17-6 advantage in rebounding in the first quarter, and this paved the way to a 17-8 lead on the scoreboard. A poor shooting performance from the Golden Hawks did too, as the visiting team made only 3 of 21 shot attempts in the first 10 minutes of play.

Make no mistake, the Rams go as their point guard goes. No matter what’s said, or written, or where he’s ranked on a National Player Rankings list, the Rams still dance to the beat of Jahmal Jones’s drum.

Against the Golden Hawks, Jones was lethal and finished with a game-high 22 points on 9-for-14 shooting to go with a game-high 10 assists. “I owed it to my teammates. Last week (against Brock and McMaster), I really wasn’t playing my best basketball. I was too anxious and rushing,” said  Jones.

At the half, the lead was 36-30 for the Rams against the Golden Hawks.

By then, Ryerson had dared third-year Will Coulthard to beat them, and it had worked to their advantage as he had shot 1-for-12 (i.e. he would finish 2-for-17). But the good thing for Laurier head coach Peter Campbell about having recruited younger brother Owen Coulthard is that when one Coulthard isn’t hitting his shots, there’s a spare one to turn to.

“Instead of being patient and letting it come to him, (Will) tried to make more difficult things to happen,” he said. “Young Owen coming off the bench and having the courage to shoot and play (is a positive).”

The back-and-forth continued in the third quarter, with Ryerson leading 56-47 after 30 minutes.

It’s only late, very late, that the Rams finally secured the victory. With the score at 68-62 after a pair of free throws from Laurier’s rookie James Agyeman, and with 5:04 to play, the home team closed the game on a 16-8 run.

“We opened it up late and made some three-pointers late,” Rana said. “Once we started to protect the ball and rebound, then we could get out and run and do our thing on offense, and I think that was the difference.”

Campbell thinks that the difference was his team’s poor shooting. “They continued to do what they were doing. And we started to panic a little bit.”

A player who impressed for the Rams is rookie Jean-Victor Mukama, who scored his 13 points in the second half. He was a spark plug, grabbing loose balls, taking (and hitting) three-point shots. JV’s eight points in the final quarter led the Rams. “He’s got great length and he can be very impactful for a freshman,” Rana said. “He’s got an exciting future.”

For Laurier, fifth-year Max Allin shook off a tough, five-point first half to lead his team with 17 points and 8 rebounds. Owen Coulthard (12) and fourth-year Jamar Forde (10) also scored in double figures. “We weren’t shooting well, but we competed,” Campbell said. “If you’re shooting as bad as we are when you’re a shooting team, to keep it that close you’re doing something right.”

Rams newcomer Kadeem Green continued to prove he has a blend of size, strength and athleticism that few can match in the CIS. He scored inside, and often, and finished with 20 points and a game-high 14 rebounds. Jones (22), Mukama (13) and Best (11) also scored in double figures.

What his new teammate Green told NPH the night before, after the win against Waterloo, wasn’t lost on Jones. The point guard took it in stride. “Kadeem is kind of new to things here. He speaks his mind, which is good, but for all of us it’s a process,” Jones said. “We know in our division we got to get by Carleton and Ottawa. It’s one day at a time.”

It’s a process, the Rams say. And the next step in that process is, they hope, a weekend similar as this one, at home against the Windsor Lancers and the Western Mustangs on Nov. 15 and Nov. 16.