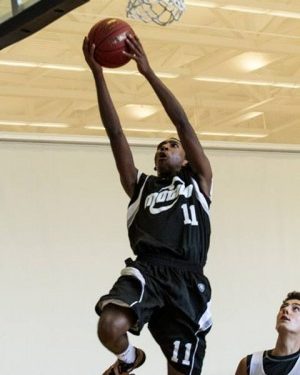 Motion look like the Dark Horse entering the Final Four of the U17 OBA championships. After defeating a strong Waterloo Wildhawks team (#4), Motion edged out the London Ramblers (#8) in a 69-68 overtime victory.

The team’s depth is evident as multiple player’s have stepped up throughout the tournament.

Kareem South on the Attack for Motion

“We have a lot of good guys that can shoot the ball…when the other team gets tired, we can go to our bench and maintain same intensity as our starting line up,” explained Chase Vassell, one of Motion’s top producers.

In game one, it was Shaquille Harris (West Hill) who lead the way with 21 points while Vassell (Pineridge) and Kelan McConnell (Bayview Glen) chipped in with 14 apiece. Kareem South (Senator O’Connor) added nine points of his own.

“That’s the great thing about this team…we have some excellent players and Chase is one of them. But what I think our strength is that we have 12 players that belong…we have twelve guys that we can put on the floor,” Head Coach Joseph Michalsk told NPH.

“Our depth wore them down…over the course of a 32 minute game and a five game tournament, we’re hoping we can wear some teams down,” said Michalsk.

However, a team that Motion was not able to get the best out of  on day one, was the #1-ranked Ottawa Guardsmen, losing by eight.

“The Guardsmen are a very good team in every sense…they don’t have quite as much depth but have tremendous athleticism and length. At this level, we have to find a way to neutralize that length, not just offensively but defensively as well.”

Lead by a young core, the Guardsmen will settle for nothing less than gold, but it won’t be easy going up against Toronto Triple Threat with a target on their back, especially after defeating TTT on a Maxime Boursiquodt buzzer-beater to capture the Etobicoke Thunder Jam championship.

The rematch won’t be in the gold medal game this time around, as the two teams tangle in the Ontario Cup semi-final. The victor will take on the winner between Motion and the Waterloo Wolverines.

And if my dark horse selection is to reach the finals, they [Motion] will have to defeat Jamal Murray and the Waterloo Wolverines, who are the lowest seed in OBA D1 at #6. Motion’s bench boss Joseph Michalsk understands that his team will need to produce at a higher level to contain any of the final four teams.

“We will have to make an adjustment.”