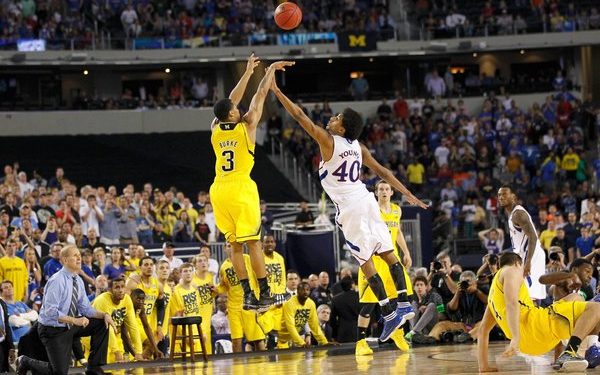 Mississauga, Ontario’s Nik Stauskas and the Michigan Wolverines have advanced to the Elite Eight of the NCAA tournament by defeating #1-seeded Kansas in an exciting 87-85 overtime victory.

Stauskas had a solid game, matching his season average of 11 points on 4 of 7 shooting, to go along with two rebounds and two assists. The Canadian freshman continues to provide strong contributions to a team that is only three victories away from a national championship.

Burke finished with 23 points and 10 assists, while energizer bunny Mitch McGary was able to carry the squad in overtime, rebounding and scoring on second chance opportunities. McGary registered a big double-double of 25 points, 14 rebounds on 12 of 17 from the field.

#4 Michigan will now advance to the elite eight to take on #3 Florida.

A total of 5 Canadians remain in the NCAA tournament. Outside of Stasukas, Marquette’s Junior Cadougan, Wichita State’s Nick Wiggins and Chadrack Lufile, along with Syracuse’ Noel Jones, a walk on [originally from Nova Scotia].