Kelly Olynyk Named WCC Player of the Year, In Running for Wooden Award 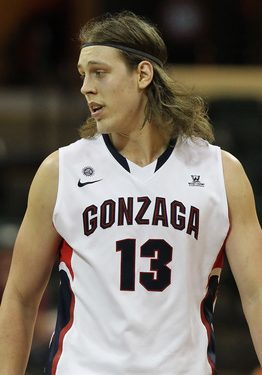 Fresh off capturing a West Coast Conference Championship and WCC Player of the Year honors, Gonzaga’s Kelly Olynyk (Kamloops, British Columbia) now finds himself with a chance to become the first Canadian to win the John Wooden Award as the NCAA’s Player of the Year.

For the Kamloops, BC native—who is coming off a redshirt season and an almost 20-month stretch between games for the number one ranked Bulldogs—it’s a stunning turnaround to a once promising career that seemed to have gone off the rails.

After earning MVP honors at the 2009 British Columbia AAA Provincials by leading all players in points, rebounds and assists (his per game averages: 36.5 points, 15.5 rebounds, 7.2 assists), Olynyk showed some promise in his first two seasons at Gonzaga, and in two international tournaments—the 2010 FIBA Worlds and the 2011 FIBA Americas—with the Senior Men’s National team, but decided to sit out last season as a non-medical redshirt.

After also sitting out the first three games of this season due to a suspension, Olynyk has been on a tear, averaging 17.5 points per game and shooting 62.5% from the field, and now finds himself as the leader on the number one ranked team in the country, while in consideration for numerous post season awards including the Wooden Award and Naismith Award.